Normalcy might be the enemy within that lets the unthinkable happen

I should probably apologise for keeping writing about states of confusion, but this blog is (if it is anything) a stream of consciousness, and what I see all around me are people desperately trying to make sense of the world that we live in.

Many in positions of influence are seeking to do so in quite illogical fashion, as I have discussed in another post today.

Unfortunately, much of the media is promoting rather alarming ideas around Omicron, including that it is ‘mild’ when that is definitely not the case given case numbers and admissions.

Underlying all this though is something that may be quite explicable, even if innocuously dangerous. It is the desire for normalcy. This is defined as: 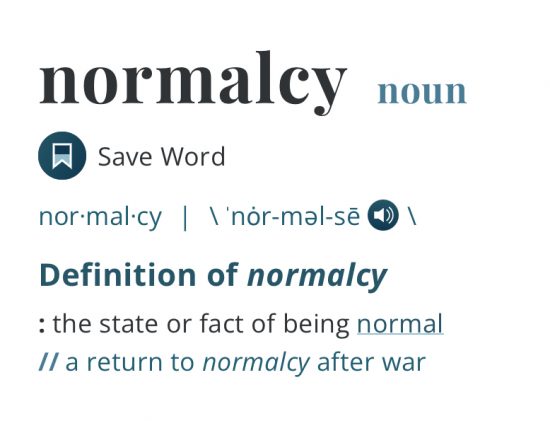 The reference to war is appropriate. The word was apparently first used by President Warren Harding after WW1, and was deliberately differentiated from normality, with which it is confused.

I was reminded of it by seeing this tweet this morning:

I think that suggestion very interesting. Can our minds be repulsed by the idea of things so apparent and yet so objectionable  that our desire for normalcy makes us reject their possibility? I have to admit that I think Emaz (who I do not recall coming across before) makes a good point.

Vitally, and by implication he also makes another, which is that we have to reject the bias to normalcy if we are to understand what is happening in our world, and then address it.

But I accept, that can be hard. Even the most open mind can want to believe fascism might not happen when the reality is that the threat is very real now. Normalcy might be the enemy within that lets the unthinkable happen.