The Bank of England is talking interest rate rises to encourage the Chancellor to deliver austerity. Call it a plot against the ordinary people of the UK, if you like because that’s what it is.

As the FT is breathlessly reporting this morning:

UK inflation is likely to rise “close to or even slightly above 5 per cent” early next year, the Bank of England’s new chief economist has warned, as he said the central bank would have a “live” decision on whether to raise interest rates at its November meeting.

The comments came from Huw Pill, the new chief economist of the Bank of England. It was always known that as a former Goldman Sachs banker he was a deficit hawk and enthusiast for higher interest rates. And so it looks to be.

So, the question is, do we need higher interest rates from the Bank of England to tackle what is happening with inflation now? Facts help here.

First, this is the UK inflation track record as plotted by a website called Macrotrends: 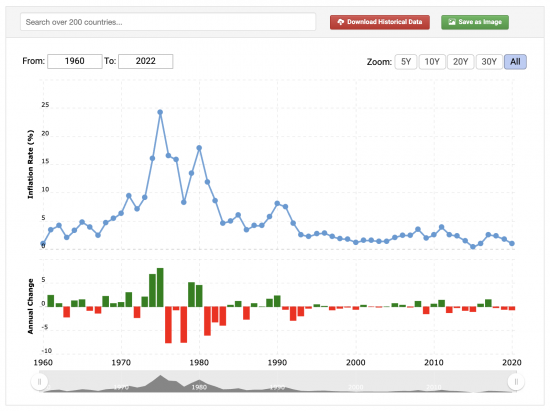 I use that data deliberately as the ONS only plots from 1987. I am aware that the longer time scale involves changes in methodology, but that is acceptable to show the required changes over time.

What is glaringly obvious is that since the early 1990s (and so long before the Bank of England was made independent) there has been an almost non-inflationary environment in the UK. No action by the Bank of England has ever really been required to address that, to be candid, barring the massive cut in rates in 2009, which was in any case fiscally motivated.

The blips after 2010 were signs of the economy reopening: they rapidly fell out of the system, just as that after Brexit has. Over the last decade, without significant interest rate changes, inflation has always returned to the mean, which is very low.

That is unsurprising. That is how an index based on a twelve-month average works, most especially when inflationary pressures are short term - as is obviously the case in the UK. Unlike the 1970s, we have no environment where long term inflationary pressure can be created, barring that from external sources entirely beyond the control of the UK government and the Bank of England and those are not in play right now on any significant scale.

So, what rate change are we talking about? 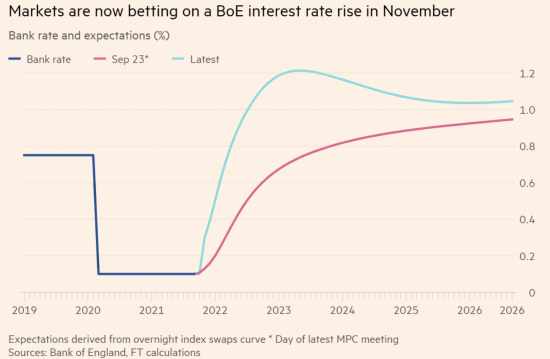 Coincidentally, Feb 2023 is when it is most likely that inflation will begin to return to 2% or less as the current inflationary trends fall out of the 12 month rolling index by then.

In other words, rates might increase to a bit above the level they were in February 2020.

So, four thoughts based on this evidence.

The first is that this inflation is all supply-side driven as a result of shortages post-Covid. None of it is demand-side driven. None seems to relate to QE or any aspect of monetary policy. None of the causes can in any way be impacted or corrected by an interest rate change. We just need to sort out lorry drivers, and gas supplies need to normalise. In that case a Bank of England reaction cannot solve any problem that we face.

Second, the inflation will go away, almost certainly, even if (and maybe because) the Bank of England does nothing. That's what has happened for three decades during which I suggest the Bank has had remarkably little impact on inflation.

Third, any change in rate now will have little immediate impact on spending capacity: most mortgages are fixed for long periods. So any change is a token gesture in the short term.

Barring that is a fourth thing, and that is that the Bank wants to signal to the Chancellor that he must cut government spending to allow for an interest rate rise. Inflation does already increase the government cost of borrowing because there are significant sums in issue in inflation-linked bonds. And for each 0.1% interest rate rise right now the cost of paying interest on the central bank reserve accounts held by commercial banks with the Bank of England will rise by about £850 million a year - which the Chancellor will use as his excuse to impose austerity.

So, all rational evidence suggests that no action is now needed by the Bank on interest rates. But the politics of the Monetary Policy Committee, wanting to support an austerity agenda from the government, suggests that a change can be hinted at right now - even if they then decide not to deliver it, because by then the harm to the wellbeing of the country by austerity being re-introduced will have been done.

This is what this talk is about. And all of it is opposed to the best interests of the ordinary people of this country.