The Banque de France has issued a working paper on modern monetary theory (MMT). In the introduction to it they say:

In the last few years in the U.S. and especially since the publication of Stephanie Kelton’s book, The Deficit Myth (Kelton, 2020) in Europe, the so-called Modern Monetary Theory (MMT) has been gaining prominence in the media and the public. This paper exposes the main proposals of MMT in the light of their doctrinal sources, also confronting them with economic facts and with other currents of economic thought.

Overall, it appears that MMT is based on an outdated approach to economics and that the meaning of MMT is a more that of a political manifesto than of a genuine economic theory.

They then produce this table, which they say summarises the differences between MMT and what they consider to be mainstream economics: 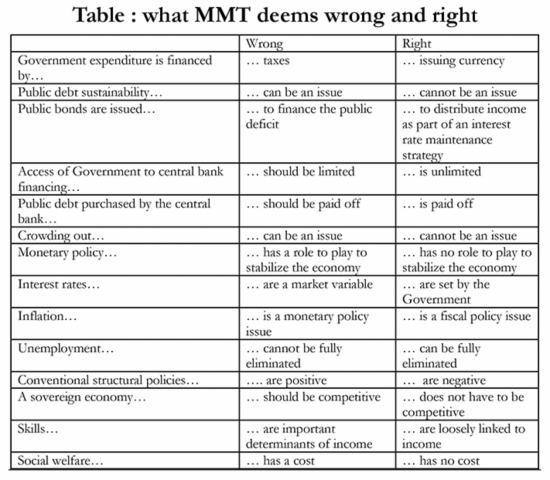 I have read the paper. The table is a good summary of the naive arguments within it. In a world where the authors believe (incorrectly) that argument can be summarised by polar opposites they create caricatures that are false, not only about MMT but also about the system they claim to support.

For example, as a matter of fact taxes very clearly do not pay for all government spending, despite their claim that it does in their world view. Borrowing and QE clearly do as well, and neither shows any sign of being unwound.

There is also not a shred of evidence that crowding out is an issue in a world where there is a glut of savings.

Nor can anyone suggest how public debt purchased by a central bank might be ‘paid off’ when the credit balance on the central bank balance sheets after that debt repurchase does not relate to public debt anymore, but does instead represent bank deposit accounts from clearing banks, the redemption of which requires the cancellation of the money created that these balances represent.

And, as is apparent from the most basic knowledge of the economics of inflation, supply side inflation cannot be addressed using monetary policy, although latest announcements from the Bank of England show that they do not know that.

Similar critiques of the other claims made for neoclassical thinking could be offered. At best these claims are glib. They are all caricatures. Most are obviously wrong.

So if they could not get their own side of the argument right did they come close to the truth with MMT? They did not., of course. That is very largely because they treat issues as if they exist within a silo. So the role of tax is completely misportated because not only is the wrong silo selection  criteria used, the relationships between silos is ignored.

To expand in this, that tax is used to cancel money creation (which, as a matter of fact takes place) to limit inflation as part of an overall policy of fiscal management to determine optimal levels of economic activity to achieve desired social outcomes such as sustainability within the constraints of the actual resources available within the economy is ignored. That type of integrated thinking cannot be fitted into their silos.

That is deeply telling. Using reductionist, rather than systems thinking, the authors reveal a profoundly Cartesian view of economics, using a faux-scientific approach which denies the integrated reality that the observable economy actually is coupled with a denial of the political reality of all economic decision making, including their own.

The authors use this useful blindness within their own methodological toolbox to justify their claim that MMT is a political construct. They do not see their own support for supposed central bank independence as another such construct that just happens to be intensely anti-democratic. Numerous other such comparisons could be made, so blind are the authors to their own biases.

What should be made of this paper in that case? It is best seen as little more than  a puff-piece presented as if an economic argument that is intended to support the status quo against a truth so apparent that those seeking to maintain their grip on power must quite literally make up arguments to support their case that are so shallow they do in the process reveal the hollowness of their own ideas.

The opponents of MMT really have got to do better than the Banque de France do if they are to counter its arguments. This was a lazy, ill informed and so blatantly biased piece of work that the Banque should be deeply embarrassed by the work of its chosen authors.