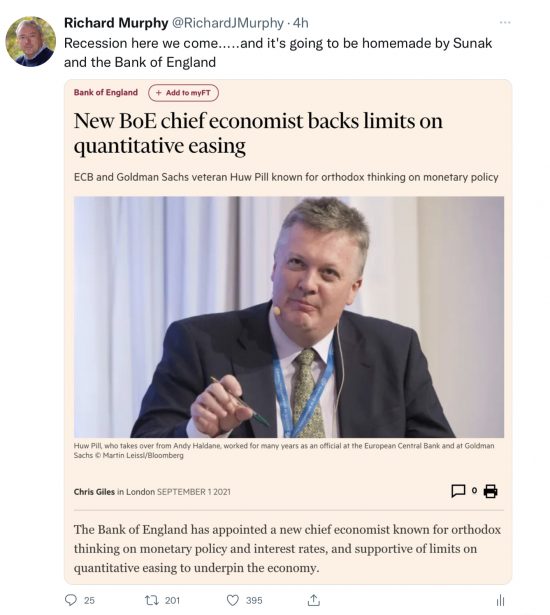 My reasoning was straightforward. We have a new chief economist at the Bank of England, who will serve on its Monetary Policy Committee and so be responsible for setting interest rates for the UK, who looks as though he has come out of central casting to be the stereotypical neoliberal banker.

Leave aside why the Bank needed another white, late middle age member of the committee for the moment.

And try to ignore the fact that he is ex-Goldman Sachs, as if any more influence from that bank was required.

Pretend for a moment that he has a strong academic record (which it’s not clear he has) which would seem to be a pre-requisite for this job.

Instead note that it is reported that he does not have much faith in QE and is a conventional monetary economist. In other words, he thinks that the government should rely on bond markets, which is wholly unnecessary, and should vary interest rates to beat inflation because that is the focus of conventional monetary policy. In fact, that is all there is to it.

How is such a person, who wishes we were still living in 2007, going to help in the situation we now face in the UK? How too are they going to help create policy that will do anything but serve the interests of banks and the very rich? It is very hard to tell.

Too darned right we will be. If ever there was a moment to have a voice criticising the City from outside its boundaries this is it. And that is what Danny and I will be doing.

Put Huw Pill’s conventional monetary policy together with Rishi Sunak’s very apparent desire for cuts in government sending and the current economic recipe is for a prolonged recession, induced solely by policy makers acting without any concern for the people of the UK as a whole.