What is full employment?

I am often asked to define what I mean by full employment. It was a theme that Danny Blanchflower and I discussed recently when talking about Mile End Road Economics. He drew my attention to the 1955 work of Lord Beveridge, as updated in 1960 to comment on this phenomenon in the post-war era.

As Beveridge noted in that year: 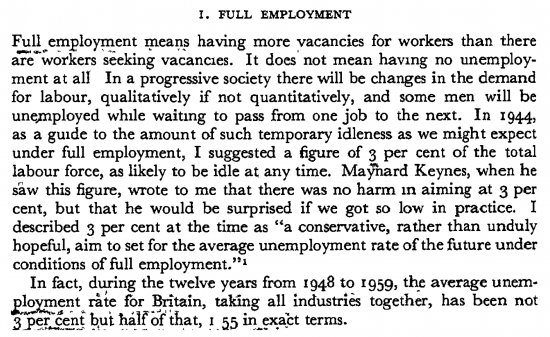 I think that definition of full employment can be updated now. It has, very obviously to allow for people to have the hours of work that they want and to be rewarded for doing so at what we now think is a living wage. But take those into account and Beveridge is the start point for an appropriate theme.

As interesting is his observation on what full employment might mean in practice. The much more recent idea of the non-accelerating inflation rate of unemployment (NAIRU) is both toxic, and very obviously wrong in the context of what Beveridge had to say. Beveridge saw that the job of society was to deliver full employment for the benefit of the people of the country. Now we have a system of economics that treats unemployment as the residual in the equation used to ensure inflation does not happen so that the wealthy do not see the value of their cash deposits fall. As modern monetary theory shows that is entirely unnecessary: without full employment there cannot be the type of inflation that requires monetary policy adjustment, as I discussed recently.

But as significant is the fact that without political and fiscal policies designed to deliver the training and skills to deliver the staff to fill jobs that exist in the economy then we cannot have optimal economic outcomes because skill shortages can exist at what seems to be full employment using Beveridge's definition with market disruption resulting as a consequence. We are clearly heading in that direction as an economy now.

In other words, full employment is a measure that is not wholly captured by Beveridge's suggestion because what is also required is that not only are the jobs offered at fair pay and with the hours and security that people want, but that there be the people to do that work or the economy is not itself at full capacity. And the only answer to that issue is to be found in political and fiscal policy, but never in monetary policy.

What Beveridge was right to do was point out that the choice between these options is political. We can choose the stagnation of the last four decades when real wages have hardly increased.  Or we could decide to have an economy that meets need, rather than self-imposed financial constraints, which is what we have fone for four decades.

With no plan for employment, or as Beveridge put it, the outlay to create demand, what is clear is that we cannot meet the hopes of people for the work that they want at the pay that they want. We could do that, and then have what can genuinely be considered to be full employment. But we have to change our understanding of economics considerably to do so. What chance if there of that? None, unless we get people to talk about it.

And, by the way, please don't argue that this is to suggest an unsustainable economy: the greatest wasted non-renewable resource is people who want to work and cannot do so: their effort is gone forever when not used, and much of the work needing to be done is low carbon impact. I see no conflict in having the goal of full employment.