Low interest rates are driving inequality ever upward, and it’s time we started to tackle this

A significant paper was presented to the annual meeting of central bankers at Jackson Hole last week. It had this seemingly innocuous title:

In this context r* is the natural rate of interest. As the paper (which uses US data) notes, the trend has been heavily downward: 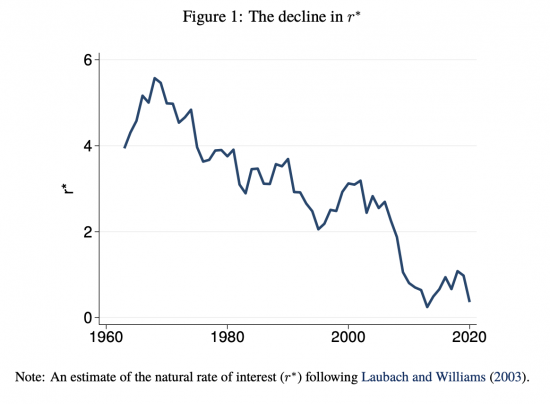 The long-term trend is markedly in this direction.

The paper accepts that there are more savings in the world. This is widely acknowledged. It also accepts that more savings with no one seeking to use them means lower rates of interest and that this would have happened irrespective of government policy to tackle economic crises.

What the paper then discusses is whether this is the result of a demographic time bomb - the baby boomers working their way through the system - or because the growing inequality in the distribution of wealth is the cause of there being excess savings that are suppressing interest rates.

In the UK Charles Goodhart and others have suggested that the glut of savings is because of baby boomers saving for pensions.  As a result he suggests that as those of that generation retire - as they are doing in increasing numbers - there will be a reversal in rates. That's part of a bigger thesis on resulting changes, but fairly summarises their position, I think.

The authors of this paper do not accept that argument, which I have always found implausible. They instead argue that the increase in rates is because the wealthy elite is getting wealthier right across the age range and that this is the reason why rates are declining, because they of course have an incredibly low marginal propensity to spend.  As such, once their savings wealth begins to rise and rates fall, creating the perverse corollary that this increases their wealth still further as a consequence of the way in which market valuations work, a cycle of ever-increasing inequality is created with ever greater downward pressure on rates resulting.

What they suggest is that the savings rate by income group is a much stronger indication of savings growth than is that by age group: 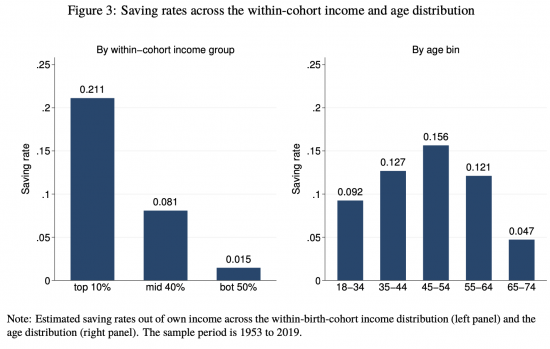 And they reinforce this with some fascinating heat map analysis: 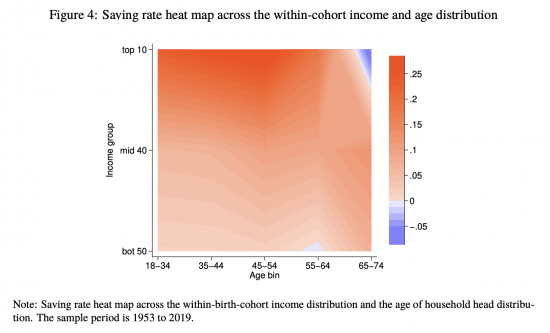 Savings are high across all age ranges amongst the wealthy (excepting old age, where there is inevitable dissaving) and not but a single cohort. Savings are driven by income-related ability to save, and not age.

This is reinforced in this heat map: 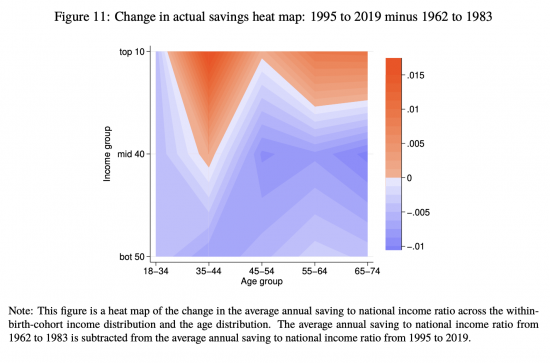 As the authors note:

For every age bin except for the 18 to 34 group, the top 10% is saving significantly more in recent years relative to the pre-period. The bottom 90% is saving less in almost every age bin. As with saving rates, the crucial variation is across the within-cohort income distribution, not the age distribution.

In other words, the wealthy are saving more, and this trend is self-perpetuating.

As Robert Armstrong said of this in the FT of this finding:

The political implications are particularly nasty. Inequality, in their view, is self-perpetuating, with the feedback loop running through low rates. Excess savings of the rich depress rates; low rates push asset prices up; the rich get richer still.

What is more, government action is reinforcing this, and the locked-in rates can't be changed without risking economic chaos now. But as Armstrong adds:

For how long are the people who sit outside this wealth machine — a majority of voters — going to tolerate this?

That's the trillion-dollar question. And tackling this inequality is one of the biggest issues that we face as a society as a result, without the need as yet really being acknowledged outside those hotbeds of international socialism at the International Monetary Fund, Organisation for Economic Cooperation and Development and World Bank, all of which are calling for wealth taxes.

My suggestions on how to tackle wealth inequality through tax can be found here.