The launch of the Mile End Road Economists

As a result of exchanges with Prof Danny Blanchflower on Twitter yesterday the 'Mile End Road Economists'  appear to have been created.

The issue Danny raised, and which he invited me to join in with, was the transparency of those always advocating interest rate rises, which we both see as deeply detrimental to the interests of the ordinary people of this country, but which so many economists seem to want.

Danny took issue with two well-known economists who have both served on the Bank of England Monetary Policy Committee, as he has. One was Kate Barker, and the other Andrew Sentance. He made a simple request, summarised in a tweet he sent to Andrew Sentance, who now lists his main occupation as being a senior adviser to Cambridge Econometrics, in which he said:

This was during an exchange that began with Danny making this suggestion:

To which I responded: 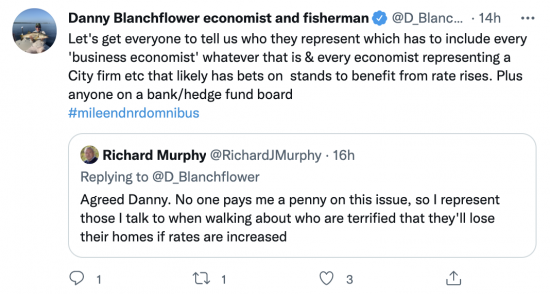 Now, I should make clear that both Danny and I have form with Andrew Sentance, who worked as an economist for PWC whilst at the Bank of England.

I also have a history with Cambridge Econometrics. I was a director there until 2019 when the Board decided to appoint Andrew Sentance, very much against my recommendation. They asked me to work with him. I met him once and quit that evening. Sometimes you don't have to try something to know it is a really bad idea, and Andrew Sentance's ideas are really bad, and based on what I might call flakey economics at best, with a considerable dash of right-wing rhetoric added in. What Cambridge Ecoomnetrics saw in him I still don't know, and in that context, I think Danny's reasoning and questioning as to whether he was representing their views, and was being promoted to do so on behalf of their client base was quite fair. I also think the extrapolation to make the request generic was appropriate. It is wholly appropriate that economists be held to account for the interests that they represent. Other professions are required to do so. Why not economists?

I do disclose my interests and funding. I have always sought to do so.

The response from Andrew Sentance was to block us both. That's not exactly a mature or reasonable response, and it does still beg the question of in whose interests he really is promoting a rise in interest rates in the UK, and does Cambridge Econometrics, to whom he is a senior adviser agree with him, and if not why not, and why do they engage him in that case? Worse, it seems to imply that he thinks opacity is the right approach to this issue. It is not.

But there is another dimension. As Danny, who created the term Mile End Road Economists also said: 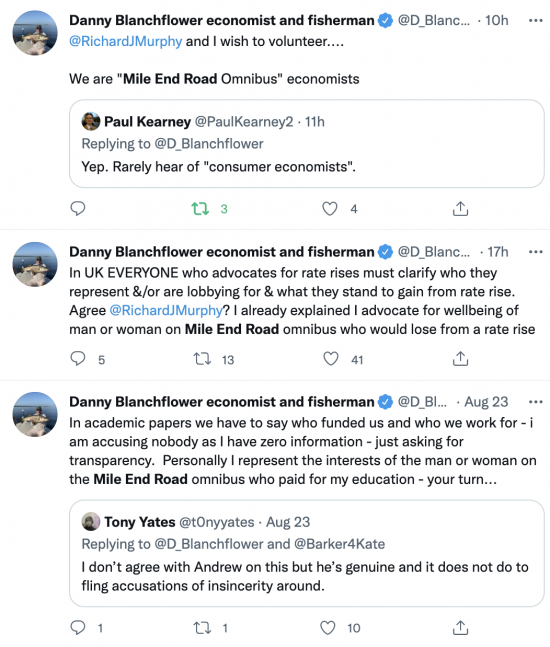 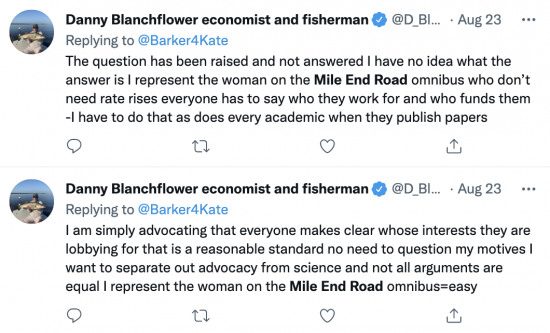 We'd welcome other Mile End Road Economists, but you will have to make your funding clear. And you'll need to act in the interests of ordinary people, and not a financial elite. That shouldn't be hard. But for some it seems that it might be.