Will the Scottish banks leave Scotland after independence?

This is a guest post from, Dr Tim Rideout of the Scottish Currency Group, with whose work many here will be familiar:

Let us consider the Royal Bank of Scotland.

Firstly, we need to understand what is meant by The Royal Bank of Scotland (RBS). It is usually implied this means what is now called Natwest Group Plc (and which was RBS Group until 2020). The Group, though is NOT a bank, but simply a holding company that owns a large number of individual banks. The biggest bank in the group by far is Natwest Bank Plc, which is and always has been a London based bank registered in England. Natwest Bank Plc was purchased in a hostile takeover by the Royal Bank of Scotland in 2000. After the takeover RBS Group Plc was established as a holding company and thus Natwest Bank and RBS became banks owned by RBS Group. There are other banks such as Coutts & Co, Ulster Bank and Isle of Man Bank. The only Scottish bank within Natwest Group is the original Royal Bank of Scotland, which is still based at the registered office on St Andrew’s Square in Edinburgh as it has been for decades (though this has moved to the very grand bank branch rather than the office building that was sold off).

Secondly, we need to realise that the many component banks in the group are all legally separate and distinct companies. They have their own banking licences and file their own annual accounts. Natwest Bank has always been English and since the 1920s has been based in London. This means the Project Fear line that Scotland could never support or rescue the Natwest Group is a deliberate lie. Each bank in the group is the responsibility of the jurisdiction where it is registered and operates. So Natwest Bank has always been and would be in future the responsibility of the UK government and the Bank of England. The US Citizens Bank, which was part of the Royal Bank of Scotland until it was sold, was the responsibility of the US Federal Reserve, thus it was the Fed that provided it with emergency funding in 2008. As stated earlier there is only one bank in the Natwest Group that is registered and operates in Scotland, and that is RBS Plc (Adam & Co is just a trading name and not a stand-alone bank). So post-Independence it is only RBS Plc which would obtain a banking licence from the Scottish Reserve Bank, be regulated by the SRB and have the SRB as Lender of Last Resort. Whether the brass plate of Natwest Group Plc is in Gogarburn or London is irrelevant as it is not a bank and is not eligible for any such funding.

Thirdly, the Project Fear line is that the Royal Bank is simply too big for Scotland to be able to regulate and support if in financial difficulties.

The table is from the latest RBS Plc accounts filed at Companies House. It shows the Balance Sheet as at the end of 2019. What this shows is that RBS is a medium sized bank with total assets of £90.6 billion. That is a small part (11%) of the overall Natwest Group balance sheet of £800 billion. In comparison Clydesdale Bank Plc had assets of £38 billion in 2015. As a result of branch closures and re-structuring within the Natwest Group, then it is now the case that RBS Plc has very few branches or business outside Scotland. Would RBS be too big for the Scottish Reserve Bank to rescue? The answer is a clear NO. Scottish GDP is around £170 billion (rather erratic at the moment due to Covid), which would make the RBS balance sheet equal to 53% of GDP. The total HMG funding by buying new shares provided to RBS Group in 2008 was about £43 billion at a time when the balance sheet was over £1.5 trillion. Equivalent funding to the current RBS Plc would be about £3 billion. In practice there is no limit to the S£ that the Scottish Reserve Bank could provide in emergency funding if it wished to do so. In the worst possible total collapse of RBS Plc the SRB might be called on to repay the depositors’ deposits of £75 billion. However much of that would be recovered from the assets and in particular the repayment of loans to customers.

Fourthly, it is worth noting the Bank has cash assets of £26.5 billion. Most of this is on deposit at the Bank of England in what is called the Reserve Account. The central bank acts as banker to the commercial banks so those banks hold their own money (as opposed to customer funds) in their Reserve Account at the central bank. After Independence then this £26.5 billion will be exchanged into the new Scottish Pound and will be held on deposit at the Scottish Reserve Bank instead of the Bank of England.

Finally, could the Royal Bank leave Scotland? The answer is a definitive NO. That is because almost all of its business and branches are in Scotland. After Independence foreign banks will not be allowed to operate in Scotland unless they establish a Scottish subsidiary, register as a bank with the Scottish Reserve Bank and hold sufficient reserves at the SRB to meet our regulatory requirements. If RBS left Scotland it would effectively close down as it would no longer be able to serve its clients in Scotland or carry out most of the current business.

We have already noted that where Natwest Group has the brass plate is essentially irrelevant as it is just a holding company. Corporation Tax is paid at the operating company level so for the year ended 2019 RBS Plc paid £338m in tax. After Independence that S£338 m would be paid to the Scottish Government. Would Natwest Group seek to transfer staff and group facilities from Gogarburn to London? That would not be a sensible business strategy due to disruption and to the significantly higher wages and other costs that would be incurred in London. In addition the Gogarburn building belongs to the Pension Fund so the rent remains within Natwest Group.

Another large bank in Scotland is the Bank of Scotland Plc. This is owned by the Lloyds Banking Group , but as with RBS the Bank of Scotland remains a legally separate company with its own banking licence. Surprisingly, you can see from the 2020 accounts below that BoS is actually over three times larger than RBS at £310 billion of assets. This is because it includes what was the Halifax Building Society and its very large mortgage book. The majority of that relates to properties in England. On Independence the Bank of Scotland would need to separate out the non-Scottish business into a rUK bank, probably by reviving Halifax as a legal entity. That would probably leave the Scottish part of Bank of Scotland at about £50 billion or so. The Clydesdale Bank Plc has assets of the order of £80 billion, but that includes the Yorkshire Bank and what was Virgin Money. Virgin Money is now the main trading name, but Clydesdale Bank Plc is the actual legal entity. As with RBS then neither the Scottish part of the Bank of Scotland or the Clydesdale could leave Scotland as that business can’t be moved without simply being lost entirely. 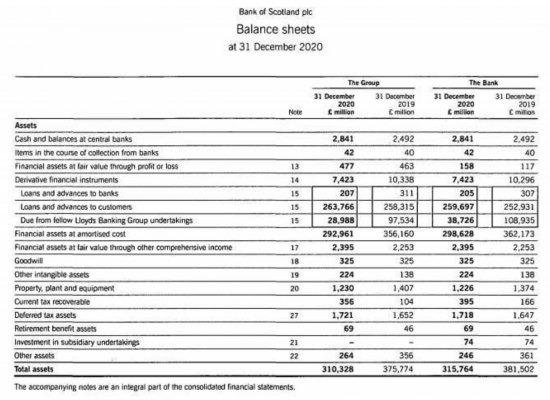 To conclude, it is not possible for any of the banks that operate in Scotland currently to ‘move’ out of Scotland. If they wish to keep their Scottish business and continue to generate profits in Scotland then they can only do so via a company registered in Scotland with, in due course, a banking licence from the Scottish Reserve Bank. The only other option would be to leave Scotland by either selling their Scottish operation to another operator or by closing it down. As the operations are profitable then closing them down makes no sense at all, so if they genuinely don’t want anything to do with an independent Scotland that would leave a sale of the Scottish business. That just changes owners while leaving the Scottish operating company essentially unchanged.