A boom? Really? You have to be wildly optimistic to think it likely

I wasn't surprised by this report on the BBC website:

Consumers are likely to play safe as the UK emerges from lockdown rather than spend like the "roaring 1920s", a survey suggests.

While millions have seen their finances hit by the pandemic, others have become accidental savers. Research for a new Consumer Insights Panel suggests Covid uncertainty will mean the majority will remain prudent.

[T]he survey of more than 3,000 people found 74% of those asked wanted to save more than they had pre-pandemic. The risk and uncertainty highlighted by Covid meant many were keen to build a financial cushion.

I know it is common to almost all economists that people will spend, spend, spend very soon and so inflation will skyrocket, but that is not what happened after 2008 when the economy suffered a smaller shock. The sectoral balances prove this (data from Budget 2021): 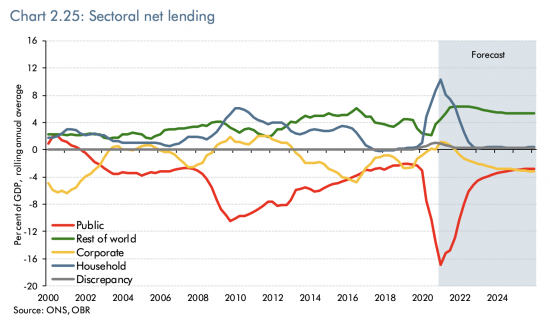 Households increased their saving after 2008 and they stuck to that until 2016.

What this survey finds is that households that can intend to do the same this time, and with good reason. People are worried about jobs and debts. Of course they will save.

Note that businesses also saved after 2008. Again, I think that likely right now.

A boom? Really? You have to be wildly optimistic to think it likely.