As democracy fades away, what comes next?

The second reading of the Police, Crime, Sentencing and Courts Bill passed the House of Commons last night with a majority of almost 100. This is despite the fact that as Ian Dunt noted on politics.co.uk:

The bill puts the power as to whether a protest can be held entirely in the hands of the police.

More worryingly, he noted that:

And yet even this benchmark was considered too high. So the bill also gave the home secretary the power to change the legal meaning of the term “serious disruption” by statutory instrument — effectively sidestepping parliament. In future, if Priti Patel or one of her successors decides that a protest was legal but they still wanted rid of it, they could simply unilaterally change the law.

Our human right to protest (because that is what it is) is now entirely handed over to Priti Patel, whose permission we will now now seek first, presuming this Bill continues its passge in similar fashion.

This cannot end well. I was interested to note this in my inbox yesterday: 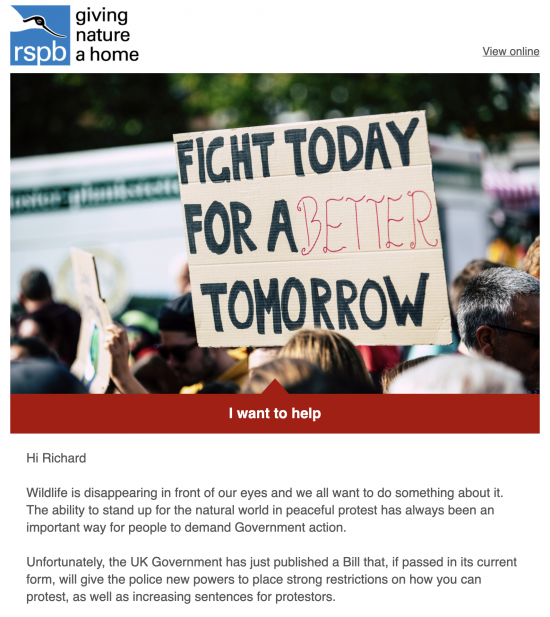 I've been a member of the RSPB since I was a boy, when quite literally in short trousers, as was normal back then. I have never seen it as especially radical. But it is noting, quite appropriately, that nature smetimes needs defending, and quite noisily. Under the proposals being made that will not be possible.

I take this seriously. It will surprise no one that I have a lot of symptahy with Extinction Rebellion. I will be open about the fact that I have advised them when they have asked for help. I also support Black Lives Matter. So you might say I am one of those who would, of course, oppose this Bill. But when the RSPB does too the government has got something seriously wrong.

Protest is about the right to be heard when that is not possible in any other way.

And yes, protest is about being unreasonable in pursuit of a course of action as yet not popular, because by defintion if it was popular protest would not be required.

But history notes that the process of change is almost entirely dependent upon protest.

History also shows that protest does not wait for permission. Last Saturday night also showed that.

So what the Tories are doing here is setting themselves up for conflict. And that is very unwise. Protest that cannot happen peacefully invariably ends up as protest that happens violently.

I am not, and never will be, an advocate of violent protest. I never want to see that happen. But it will if this Bill progresses. That is inevitable. And the Tories must know that.

So what is their game? What are they trying to achieve with this Bill? Is it that they simply want to create the opportunities to suggest that there is a need for ever more oppressive crack down on opposition? And will they deliver on that? This seems the likelihood to me, with them playing very strongly to a right wing audience that they think will back them all the way on this.

No government has ever, eventiually, survived such a strategy. Tyranny of this form always, eventually, fails. But the price of opposing it can be very high. The cost in terms of ruined and even lost lives can be horrendous. And that is where I fear we are going.