For the first few years that I was on Twitter I had an ambiguous relationship with it. Whilst my commitment to this blog has remained pretty fixed for almost fifteen years now, my Twitter postings came and went. So too did my accumulation of followers vary in pace as a result.

Then, about a year ago I began to see Twitter as a mechanism to really extend the outreach of the ideas here. The videos seem to have helped this. When I began work on them I had about 55,000 followers. By September it was 60,000. As I noted on Monday, I hit 70,000 at the weekend. This morning that pace has accelerated. I have over 72,500 now.

The increases are almost invariably heavily linked to my publication of long Twitter threads. These are intended to be explanatory of economics. The same threads appear in this blog and never cause much of a circulation increase. But on Twitter they do.

It may be because they are unusual. Twitter allows ‘threads’, which are strings of related lists that appear together when viewed. They are not uncommon. They usually allow someone to post a longer piece by listing it in parts. Few are more than a few tweets long. I use them differently.

First, I write in paragraphs that are never longer than 280 characters. The tweets in my threads are intended to be complete, in themselves. That can be quite challenging when writing, but I like the discipline.

Second, my threads can be long. The one on the economics of the national debt posted yesterday was more than 80 tweets long. That should not make it popular. An essay of well over 3,000 words is not the obvious thing to put on Twitter, and yet it works.

These are the stats for the first tweet in that thread: 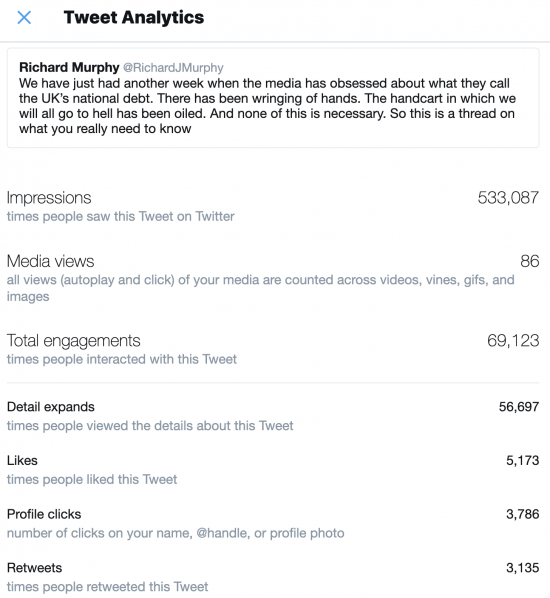 That tweet has reached more than half a million people, although not all will have read it, of course.

Almost 70,000 people have, however, actively engaged with the tweet, with more than 5,000 liking it and more than 3,000 retweeting it, hence its reach, which is far greater than I alone could achieve.

And a lot more people are now following me, which when part of the aim of this blog is to be educational, is good news.

Oddly, the thread in question was written three weeks ago, on a Saturday morning. It took four hours to write. And when I had done it I felt the timing was not right and did not use it. I thought yesterday was the right time, and so checked it through again and then published it.

In contrast to the Twitter result, the version of that thread posted here was only the fifth best read page yesterday. It was read just over 500 times. Total blog reads were just over 10,000 yesterday. It’s not hard to see why Twitter matters in my work right now.

But the question is, what to do with these threads? There are about five significant ones now. Should they be an ebook? Or a proper book? Or what? Thoughts would be welcome.