Governments borrow. That’s a fact. What MMT makes clear is that’s a choice. The debate should be on whether that’s a good choice, and not on whether it happens. 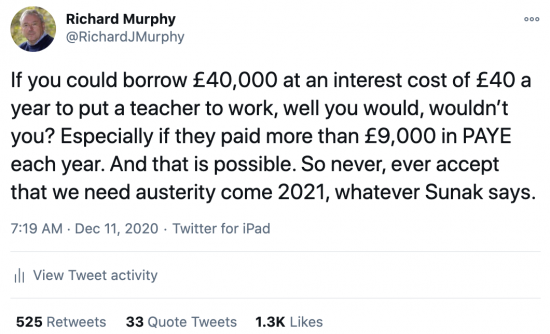 It's been property popular. I suspect it will get many more likes as yet.

I got this in reply from the Gower Initiative for Modern Money Studies: 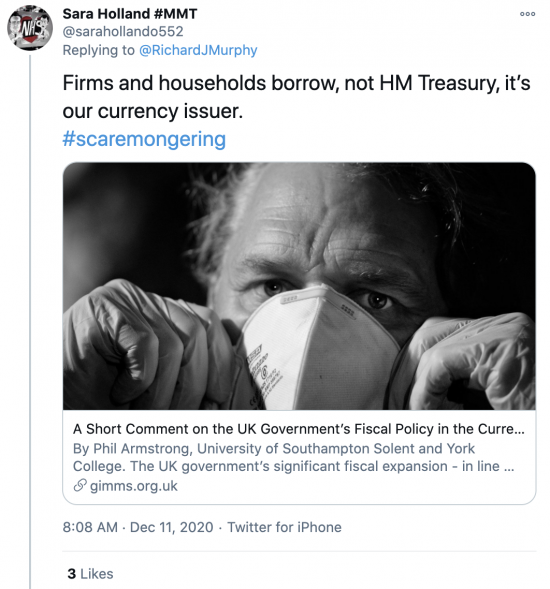 It has to be said that I am aware that GIMMS do not much like me. I was an adviser when it started but I criticised Bill Mitchell, for good reason. Now they say I am not an MMT economist and advise anyone who will listen not to read this blog as I do not promote MMT. MMT needs friends like that.

I replied saying this:

To which I replied in an exchange that went as follows: 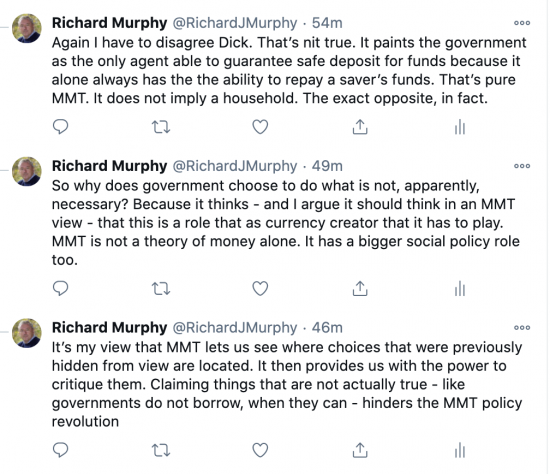 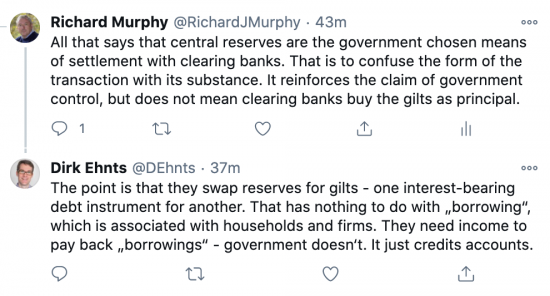 I did, subsequently, apologise for calling Dirk Dick, which was autocorrect in play.

So let's deal with the real issues here.

Nor can it be claimed, as Dirk did, that because central bank reserves are used then this cannot be a loan. Central bank reserves are simply means of settlement (call them money if you like, which is what they actually are: the Bank of England said so in 2014). So there is nothing special about that, except to imply that the government has special power when demanding that payment be made this way which indicates its special role in such relationships.

Having addressed these points there is nothing left to the argument. In summary the claim made is that a loan is subscribed for in cash. That is it. That does not mean it is not a loan.

So I go to my main point. This is that MMT cannot say governments do not borrow. As a matter of legal fact they do. As a matter of economic fact they do as well. The asset swap that MMT describes borrowing to be (swapping non-interest-bearing money for interest-bearing gilts) is an act of borrowing, by definition. It does not fund spending, of course. But it is borrowing, nonetheless. So to say that governments do not borrow and that only the private sector does is factually wrong.

What, instead, modern monetary theory actually says is that governments need not borrow. Any government with its own currency and central bank can create all the money it needs to fund its activities without borrowing. Of course, it needs to tax to control inflation. That’s a fact. And it says borrowing is not a necessity. In fact, it is an activity entirely undertaken by government choice. As MMT makes clear, a government can always borrow from its own central bank, with no net interest cost if it so wishes instead of paying interest, assuming the conditions that I note apply.

What I would say is that it is in creating this understanding that MMT is important. MMT makes clear that choices are available when very few understand that options exist. That is what good theory does. It does not change reality. It helps us understand reality better. And that’s massively important. It offers choice when previously it was thought there was none. In the process it also permits criticism about choices made. It allows those of us not in power to more ably critique those who are in power. And that matters, enormously.

But it’s a straightforward mistake to move from the insights MMT provides to saying it prescribes anything. For example, despite knowing that governments do not need to borrow I still suggest that they should. But now I know it is a choice. And I know that I am choosing to say the government should play a very special role as borrower of last resort.  That’s because I think it important that it fulfil that role. I also think that interest rates should be kept very low so that it does so at minimum cost. But that does not mean I am contravening what MMT says. I am consciously suggesting a policy that is wholly MMT consistent that is chosen as an option, and not a necessity. And I think that awareness is what is critical.

If anyone wants to throw me out of the MMT community for saying that an obsession with the form of transactions is inappropriate when what is important about MMT is the policy substance of what it makes us think possible, so be it. I can live with that. But right now I am quite happy to say that GIMMS and Dirk Ehnts and both straightforwardly wrong, and making claims like this do not help MMT at all when it actually has so much to offer.

In fairness, the GIMMS response was:

With respect to GIMMS there are so many errors in that it's hard to know where to start.

The investment is the spend. But all spending is a debit in accounting terms and has to have credit, and GIMMS appears to be suggesting single entry. That makes no sense, at all.

And sure The Treasury is the UK public purse. But nothing I said suggested that the bloated financial sector and corporate welfare need gain. I said the government borrows. Most of that is from foreign governments and pension funds and life assurances companies right now. Maybe GIMMS does not want them to save in gilts. That's fine. That's a choice. But it is not what MMT says.

MMT is not a left wing campaigning tool. It is about economic theory. And that requires that facts be stated properly. I did that. Governments borrow. Now let's discuss why and whether that is wise. But let's not have MMT deny reality because that does not help it, at all.