How to find Â£50 billion

As some will have noted, there were a lot of reports yesterday on the fact that £50 billion of banks notes are missing in the UK economy. This got me thinking. And as a result I have to suggest that finding that £50 billion of cash would not be hard. Here’s how to do it.

As the Public Accounts Committee of the House of Commons has noted, around £50 billion of banknotes in issue have no explained use. In other words, they do not appear to be used for regular cash transactions. What their alternative use might be is not known.

Some could be in the possession of tourists, who have not bothered to exchange them on leaving the country. But the amounts involved would be small.

A bigger sum might be cash savings under the proverbial mattress. This is entirely plausible. It is possible that some of this will be related to benefit fraud: the amount of savings a person has can have a significant impact on their ability to claim a number of benefits.ï¿¼

There is no doubt that a significant part of this moneyï¿¼ Is used within the shadow economy. That can cover activity where tax is evaded, of course. But it also includes drug dealing and many forms of human trafficking and abuse.ï¿¼

No one is finding it easy to come up with an innocent explanation for the missing money. I cannot.

The Public Account Committee has suggested that the Bank of England is indifferent to this issue, even though in it acknowledges that the value of notes in issue is way in excess of those that appear to be required to meet the needs for regular cash payments within our economy.

The question then arises is whether anything can be done about this, and the obvious answer is that this is an issue that could be quite easily addressed if the willpower to do so existed. The way to address it is actually remarkably easy.

To address the issue what has to be done is that at short notice it is announced that all the UK’s main denomination banknotes (£5, £10, £20 and £50) are to be replaced. No more than a couple of weeks notice should be given.

The change over period from the old to the new notes must be very short. A maximum period of a month should be allowed, but if possible, a shorter period of perhaps no more than two weeks should be provided.ï¿¼ï¿¼

It would then be the case that within a period of four weeks, at most, most literally the entirety of UK notes in issue would cease to be legal tender, and be replacedï¿¼.

It’s a fact that designing and introducing new banknotes is normally a very time-consuming, and lengthy, process. But,ï¿¼ï¿¼ï¿¼ this exercise does not actually require the design of new banknotes. All that needs to happen is that the colours of existing banknotes be swapped.

And yes, I know that will create issues for some colourblind people, But I am not sure that in this case that is a major impediment to progress, although I would, of course, be willing to hear objection.

During the four-week transition period old notes could, of course, be spent. Replacement new notes, with a total value of about one-third of the sum previously in issue, could then be injected into the economyï¿¼. Because that’s all we apparently need.

At the end of the four week period, or any time during it, a person could present old notes and ask for new ones. But in the case of any sum in excess of £200 the person making the deposit would be required to identify themselvesï¿¼.

The usual money laundering rules for proof of identity would apply e.g. a passport, driving license or an equivalent range of documentationï¿¼ would be required to swap notes. Without proof new notes could not be obtained once the transition was over.

In addition, any request for an exchange of notes in excess of £500 would require that the money first of all be paid into a bank accountï¿¼. This money would then become traceable.

The bank through which cash deposits were made should be required to seek explanation from the depositor as to the source of the money. A very low threshold for suspicious transaction reports should be applied. HMRC should have the power to freeze deposits, instantly.

Five things would immediately happen. First, the vast majority of this £50 million would either be found, or it would cease to be in use and cease to be legal tender, and therefore cease to be available for criminal or fraudulent purposesï¿¼.

Second, this cash would now have identifiable ownership. Of course some will be disguised, but the power for HMRC to freeze accounts and investigate funds must be used: this is a one off chance to freeze the shadow economy. The tax take will increase.

Third,ï¿¼ criminal trading will become harder to undertake. This will be a massive benefit to society.

Fourth, by eliminating cheating we will have a fairer, more equal society and one in which honest small businesses will have a better chance of flourishing because they will not be undermined by dishonest ones.

Fifth, it could be argued that the national debt is reduced, although that is very much open to question for reasons I will publish soon.

How much would it cost? The National Audit Office happened to publish a survey on the cost of producing currency during the course of 2020. They estimated there are 4.5 billion notes in issue.

This chart shows the use of banknotes over time: 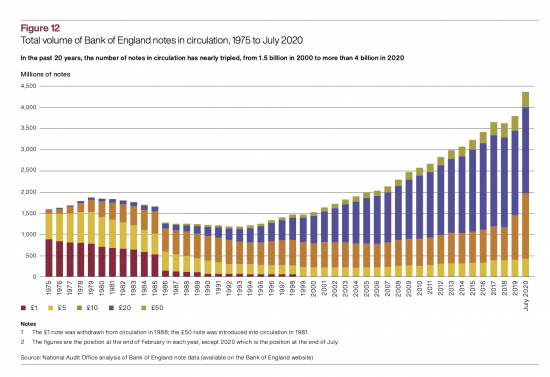 They also indicated the cost of printing notes was about 7p on average. Only one-third of notes will be replaced. That implies a cost of £105 million to replace the necessary banknotes. Banks might also need to be paid for the additional work involved.

The benefits of reissuing all notes should massively outweigh the costs though, most especially if a significant number of investigators are employed to pursue data and collect tax owing and pursue criminal enquiries.

And let’s also be clear, even if no cash was recovered (it’s possible, although unlikely) significant criminal activity would have been discouraged. It’s a win either way.

So will the social benefits outweigh the costs? I think so. I look forward to the argument from the politician who says otherwise.