Labour has reaffirmed its commitment to a Green New Deal in a document released by Anneliese Dodds and Ed Miliband in their respective roles as Shadow Chancellor and Shadow Business Secretary. which roll covers the environment brief.

In summary, the plan is sound. I would like it to be more ambitious, and believe it could be. But it hits the right targets. That makes it a solid step in the right direction. The principles that it embodies are, I think, appropriate: 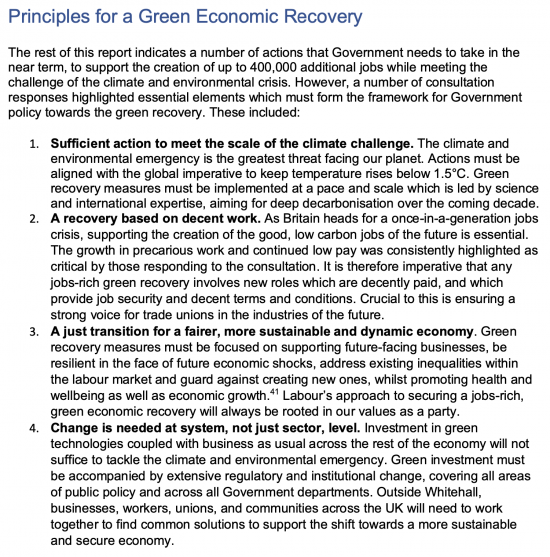 My submission, with Colin Hines, to Labour’s call for evidence was on funding. We proposed a national investment bank, of course. It is in Labour’s proposal. And we suggested that this bank should be allowed to issue bonds, permitting green QE if need be. In addition, we suggested that those bonds be incentivised for retail saving. Labour has said:

I am pleased Labour has taken note. The proverbial ‘how are you going to pay for it’ question has been addressed without, I admit, explicitly touching on MMT.

So I can back this plan.

That said, I am aware that some in Labour are angry about it. The suggestion is that Rebecca Long-Bailey’s version of the Green New Deal was planned to exclude private sector participation in the process, and so what is being proposed now is not sufficiently socialist. I admit that I think the criticism unfounded. That is firstly because the delivery of a Green New Deal without private sector participation would be nigh on impossible: of course private sector companies would always be involved in the supply process. And second, that is because I consider this an irrelevant argument. We live in a mixed economy and are going to do so. Redrawing the boundaries between sectors may well be important, most especially in many care environments and around education, justice and other issues. And I am not denying, of course, that direct local authority action may have a real role to play in delivering the Green New Deal. But to pretend that the environment is the secondary in concern in the Green New Deal is just wrong.

Labour has a serious policy now, and I welcome it.