How many things can Rishi Sunak get wrong in one video?

This tweet, and the video embedded in it, is quite extraordinary:

Whether the tweet to which Sunbak responded was genuine or not (and who knows?) is not the issue. It is the errors in the reply that are staggering.

Sunak says first of all that the government has no money of its own.

Then he claims that government spending is funded only by taxpayers and borrowing.

After which he claims that borrowing has to be repaid.

All these claims are wrong.

The government makes all our money

The only currency we have in the UK is sterling. It is government created. No one else can make it. It is the only legal tender we have. It can only be put into circulation by the Royal Mint, which is government-owned, and the Bank of England, which is likewise government-owned.  We literally only have government made money in this country. And we have to use it: nothing else is accepted for payment of taxes but g0vernment made money. That is why we use it for our everyday transactions.

The idea that there is no government made money is, in that case, wrong. Instead, we only have government money. Taxpayers simply use it. And the only reason they have it to use is because the government spends it into existence and then leaves it in the economy by running deficits i.e. by not claiming it back by way of taxation.  The reality is that there is no such thing as taxpayer money.

That said, I acknowledge that it is true that banks can create money. The Bank of England does do that, day in and day out for the government by advancing it the funds it wants to spend whenever it wants to spend them. Historically that was done on overdraft. It was called the Ways and Means Account. Since 2009 that's been replaced by an alternative form of money creation, which is quantitative easing. The UK will do £300 billion of that this year.

Money is also created when banks lend. But they are only allowed to do this under government licence. And they lend using sterling - not their own currency. In other words, their money creation is wholly backed by the government. In a very real way we know that, because deposits with those same banks are government-guaranteed to £85,000. Again, that means all money we have is government money. There really is nothing else.

The government is funded in three ways

The government funding mechanism is not tax and borrowing dependent. It has three components. The pound owes its existence to the combined action of the Bank of England that creates it, HM Treasury that spends it into use and HM Revenue & Customs that demand that taxes be paid using that currency. The last is especially important: precisely because tax can only be settled in sterling we have to make use of it in our everyday transactions and so it has value. But note, the Revenue comes last, and not first, whilst money creation by the government or banks operating under licence from it comes first.

Does borrowing have to be repaid?

In a word, no. There is no reason to repay the national debt. And as evidence, look at this chart: 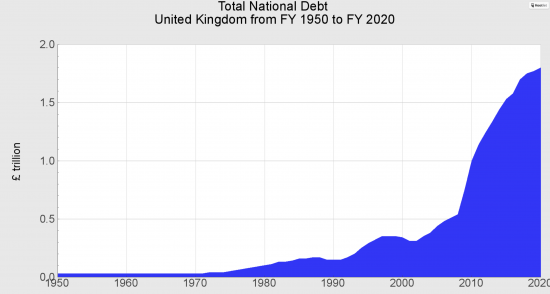 Almost all our national debt has been created since the end of Wolrd War 2.

Every now and again very small amounts have been repaid, but I stress the emphasis on 'very small amounts'. What is more, most such occasions have been followed by some form of economic downturn. That is inevitable: repaying government that takes money out of the economy that it needs to function.

And that is the important point. We do not need to repay national debt because people want to own it. Those people are banks, building societies, pension funds, life assurance companies, individual savers, foreign governments and others all of whom value the opportunity provides for a safe place to save. Unless we are determined to take that safety away from them and force them to save elsewhere there is absolutely no reason at all to repay the national debt. What is baffling is that Rishi Sunak does not understand that.

It is exceptionally worrying to have a Chancellor of the Exchequer who has literally not a clue about how the economy that he is responsible for works, and how one of the basic functions within it, which is money creation, takes place. Without such essential understanding, which requires that he realise that he is responsible for money creation in our economy and that all the money that we use is government-created, then we can come to one of two conclusions. They are that either inadvertent economic mismanagement will take place or, alternatively, he actually knows the truth and deliberate economic mismanagement will take place. But, those are the only two options we've got so long as he persists with his entirely false claims.