Laurie MacFarlane had an excellent post out on Open Democracy yesterday. This was the heading: 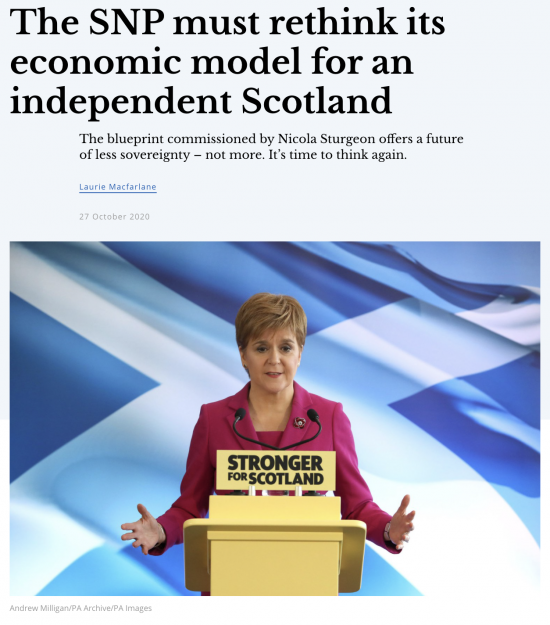 The piece is a critique of the work of Andrew Wilson and the Scottish Growth Commission, with which I (to put it mildly) have some considerable difficulties. To get a feel for what he had to say try this:

A generous interpretation of the report is that its recommendations were designed to ensure that independence involved minimal changes to the present UK arrangements. But if that is the case, then what is the point of independence?

And then note what he has to say on the proposal that sterling be used in Scotland after independence:

The claim that with sterlingisation “the monetary policy situation that we have now would continue” is either deliberately disingenuous, disturbingly ignorant — or both.

This is fair summary:

Without a central bank to accommodate such a fiscal expansion, a sterlingised Scotland would have been entirely reliant on international investors willing to lend sterling. The absence of a lender of last resort would mean paying higher rates of interest on Scottish sterling bonds, and tailoring public policy to look ‘credible’ to financial markets. It would also leave Scotland vulnerable to predatory investors looking for vulnerable prey to exploit during a crisis.

And, as Laurie noted, when asking how this terrible piece of thinking came about:

The report begins by thanking the “wide range of interests” the Commission asked for ideas about how Scotland’s economic performance could be improved. Among those consulted, 17 out of 23 were business lobby groups, such as CBI Scotland, the Scottish Property Federation and the Institute of Directors. Notably absent from the list were trade unions, environmental groups, or any group representing workers or marginalised communities in Scotland.

This is a report by big business for big business in Scotland, serving its interests, which are undoubtedly promoted by sterlingisation, most especially if you're a hedge fund. It's not a report for the people of Scotland.

With the right plan on currency, economic model and transition, there is no reason why Scotland could not become a successful independent nation. But that plan needs to come from the 2020s, not the 1990s. And it needs to come from a broad cross section of civil society, not just business groups.

Far from being an asset to the independence cause, the Growth Commission is its biggest liability. It’s time, as we say, ‘tae think again’.

I could not agree more. One only hopes the SNP listens. As things stand, it would be taking Scotland towards disaster by trying for independence on this basis. Please read the article: it's worth the time.