Is the recovery over?

I have never believed we were going to have anything even remotely like a V-shaped economic recovery. That's not to say that I did not think that we would improve on the position of the UK economy reported in May this year. Given the way that the ONS reported GDP in the first few months of the downturn it was inevitable that there would be some degree of bounceback as soon as schools returned, and that happened.

However, some, including Andy Haldane at the Bank of England, have continued to insist that a V-shaped recovery is likely. Latest data from the ONS, as reported by the Financial Times, suggests otherwise. Take this chart as an example: 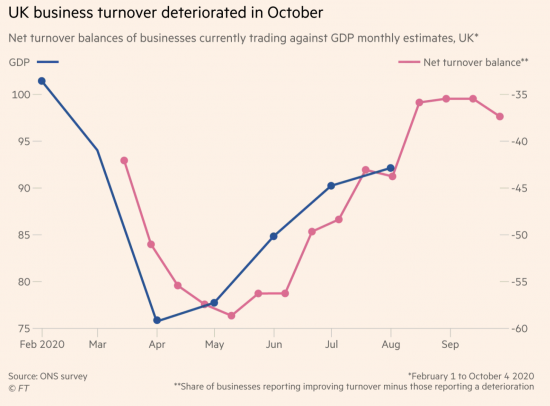 As the FT notes:

Business turnover ... started to deteriorate in October, according to a survey run by the Office for National Statistics across nearly 6,000 businesses and published on Thursday. It found that the share of businesses reporting decreased turnover rose in the two weeks to October 4, for the first time, after a steady decline since May.

The deterioration in business turnover could forebode further declines in GDP, which are published with a longer time lag, as “turnover estimatesâ€‰.â€‰.â€‰.â€‰broadly reflect the published UK monthly gross domestic product estimates”, the ONS said.

That there is a link is hardly rocket science. If business suffers as badly as it is at present then it is inevitable that there will be an impact on GDP. The real question is whether or not this is likely to continue. And the evidence is that it will. As the same report in the FT notes, consumer confidence is falling again. This is hardly surprising in the face of a second wave of coronavirus. It is also unsurprising as lockdowns begin. And it is a frank recognition of the meanness of the government's response to the developing situation. All these things, inevitably, create an environment where a downturn is likely, with the failure of the government being one of the biggest contributors to that situation.

It is too early to say for certain whether the recovery has ended. But it is not too early to say that I think that likely. The government's continued message that it was going to withdraw support to people and businesses at the end of this month has cut through: people realise that they are on their own now. That will have a massive behavioural consequence, one of which is that the paradox of thrift will kick in. This paradox is that at just the moment when we need everyone to spend to kickstart recovery the rational individual response to the situation that people face is to save. Only government action can overcome that rational response. But, we have a government that wants to reinforce it.

No wonder that we are going to be in deep economic trouble.