A number of people have asked me for evidence to support my suggestion that the UK government has not borrowed money during the course of this year to pay for the coronavirus crisis, so here is the evidence.

First, this is the latest data from the Office for National Statistics on UK borrowing during the course of the year to date, which covers the period to 31 August 2020: 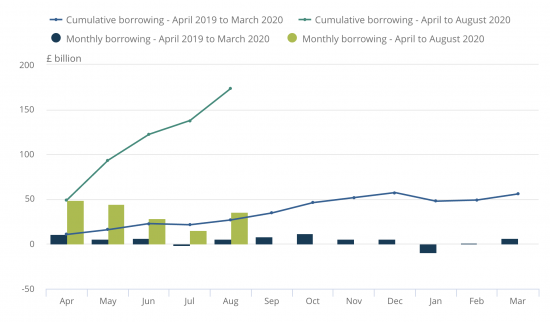 The data on quantitative easing comes from the Bank of England. First, there is this announcement on 19 March:

At its special meeting on 19 March, the MPC judged that a further package of measures was warranted to meet its statutory objectives.Â  It therefore voted unanimously to increase the Bank of Englandâ€™s holdings of UK government bonds and sterling non-financial investment-grade corporate bonds by Â£200 billion to a total of Â£645 billion, financed by the issuance of central bank reserves; and to reduce Bank Rate by 15 basis points to 0.1%.

I would argue that the Bank cannot create central bank reserves because they are the consequence of this action, and do not fund it, but what was clear was that Â£200 billion was to be spent on buying back government bonds, which means they are effectively cancelled. There is not the remotest chance that any of these rep[urcahsed gilts will ever be sold back to financial markets. Nor is there ever going to be reason why they need to be so.

By June it was necessary to announce this:

On 17 June the MPC voted for the Bank of England to continue with the existing programme of Â£200bn of UK government bond and sterling non-financial investment-grade corporate bond purchases, and to increase the stock of purchases of UK government bonds, financed by central bank reserves, by an additional Â£100bn, to take the total stock of asset purchases to Â£745bn.

Â£200 billion had been spent.Â  By 30 June the spend had increased holdings as follows: 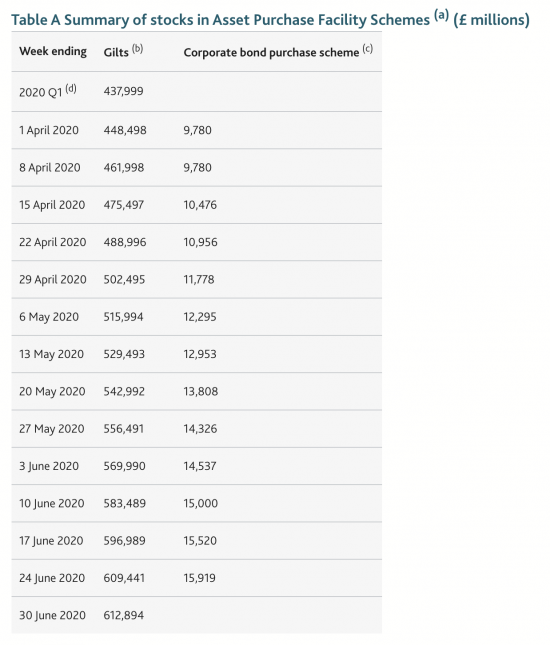 Â£176 billion had been spent on gilts - which was more than had been borrowed by 31 August.

Since then more gilts have been acquired. Details have not been published as yet. However, the margins are heavily in favour of gilt purchases still exceeding borrowing.

In other words, the government has not borrowed any new funds this year. Funding has instead been paid for with new Bank of England created money. And if in doubt that this is new money, the Bank of England says it is:

The aim of QE is simple: by creating this â€˜newâ€™ money, we aim to boost spending and investment in the economy.

The argument that the taxpayer and bond markets are paying for the coronavirus crisis is wrong in that case. We are not borrowing. We are making new money to pay for the coronavirus crisis. And if it is said in that case that money is not available to pay for continuing support for those who are suffering as a result of this crisis that is untrue: instead a political decision has been taken to not create the money required to support them, or to borrow to do so. And deciding not to support people is not the same as being unable to support people. Government lies on this issue should not be accepted.