To believe in fair competition, a fairer society, a strong public / private partnership and real opportunity you have to believe in a functioning state

Overall there is little that I can say to commend the Institute of Fiscal Studies report, out today, on the government's spending options. The report applies conventional analysis to conventional options and concludes that the government has a choice between more tax, more borrowing and less spending in the future without ever considering the option of more money creation when an increased scale of government activity, which the rerport forecasts, will obviously require new net government sector money creation.

There are, however, one or two points worth noting in the report and this table is certainly worth recording: 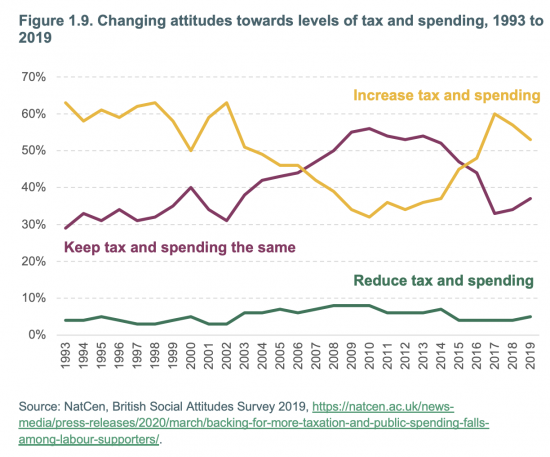 The lack of support for the neoliberal project is staggering, despite all the investment that has been made in it by so much of the political class.

That there has been significant overall support for increased tax and spending since 2015 is hardly surprising. I suspect that such support is increasing again at present. What is apparent is that during periods of Conservative government it almost invariably increases, and usually exceeds support for keeping tax and spending the same, whilst being massively more popular than reducing tax or spending.

I am, of course, encouraged by this.

I am, in fact, more than encouraged. Day after day right-wing astroturfing commentators turn up on this blog to suggest that I am presenting a far-left agenda. In fact, what this government-funded survey shows is that I am putting forward ideas supported by a majority in the UK most of the time. The idea that there is no demand for a bigger estate to meet real social demand is absurd.

But, and I stress it very strongly, that does not mean that people do not want an effective private sector. In fact, I am sure that very many who support the idea of increasing tax and spending would very strongly hope for a more effective private sector, as I do. But what we know is that small government, lax regulation, a tax authority stripped of its resources, and a wholly ineffective company registrar have in combination left the UK without any prospect of an effective, functioning, fair, private sector because we do, instead, have a system where cheats prosper, monopoly thrives, new market entrants have almost no chance of success, tax is not paid and fair competition has ceased to exist.

To believe in fair competition, a fairer society, a strong public / private partnership and real opportunity you have to believe in a functioning state. It would seem that a majority in the UK do that. We are, however, denied it. Why is that?