As the Guardian has noted this morning:

Tax increases will be needed across the board for Britain’s highest and lowest earners to bring down record levels of government debt amassed during the coronavirus crisis, leading economists have warned.

Sending a message to the chancellor, Rishi Sunak, as he explores possible options for raising taxes at the autumn budget, experts from four of the country’s leading economic thinktanks said any significant tax changes should not be introduced until a sustainable recovery has taken hold.

I noted that this hearing was on yesterday. At one point I intended to watch, but events got in the way. But I did notice something from the notice of the hearing. This noted that the speakers were: 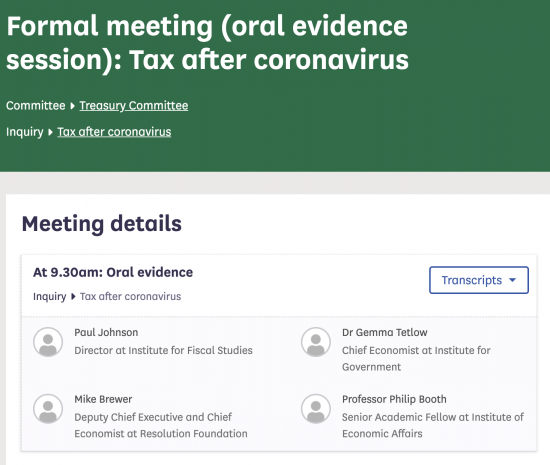 So we have one person from a far-right think tank that will not disclose its funding and three other speakers, all of whom have worked for the Institute for Fiscal Studies, which is a microeconomic think tank that says it does not do macroeconomics. And yet the issue that they were discussing was macroeconomics. I am not disputing that each of the three currently or formerly at the IFS might know about tax at a micro level, but macro knowledge appeared to be almost entirely absent from the transcript of the hearing, which I have read.

Perhaps the most telling evidence of that is that there was no questioning within the hearing on the scale of the so-called national debt. It is claimed to be £2 trillion, but net of quantitative easing it is not: 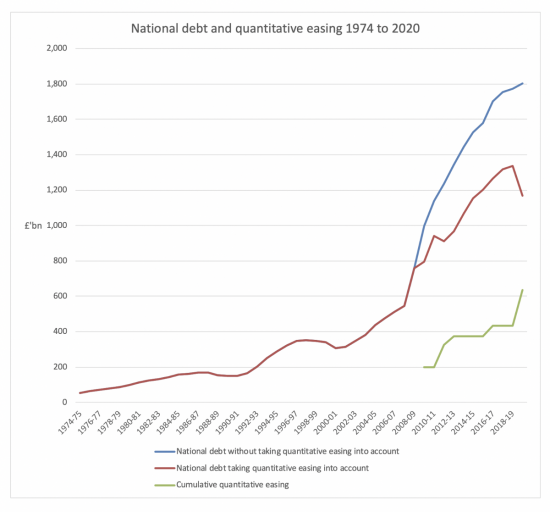 That data is to March 2020. The percentage data looks like this: 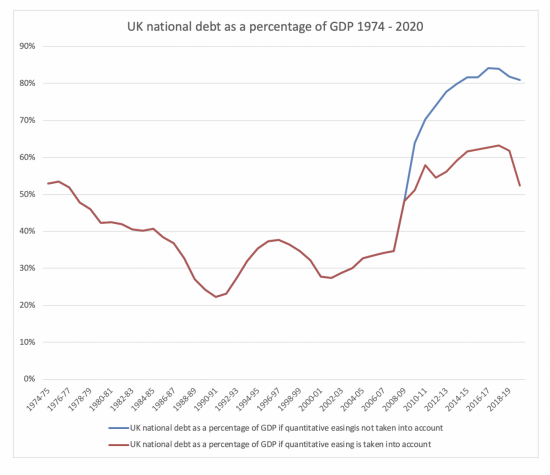 That data is, again, to March 2020, and we know that the top line has now risen to 100%, aided (no end) by the fall in GDP, but that the real debt figure is well below the headline figure was not discussed. Indeed, the impact of quantitative easing was not mentioned once in the hearing. This was a discussion of tax to repay debt where no one present seemed to know that tax does not have this role. Instead, we got exchanges like this between the far-right Steve Baker MP and the far-right Philip Booth from the so-called Institute for Economic Affairs:

This was not challenged by the meeting. Nor was this comment from Booth:

How is coronavirus to be paid for then? By making people work until they drop, apparently.

But then, the whole discussion was deeply regressive. Gemma Telow for the Insitute of Government when asked to discuss tax increases said this:

So, the focus was on being regressive. It was a commonplace theme. All that was agreed was the deferring the increase in regressive taxes was desirable for the time being. Overall, the tone was deeply depressing, ill-informed as to the role of function of tax in the economy where Philip Booth was allowed to make wild claims without any correction being offered, and (to be blunt) very small-minded in the sense of being intensely micro, and so peripheral.

At the conclusion of the hearing each was asked by MP Harriet Baldwin to summarise their recommendations. This is what they had to say: 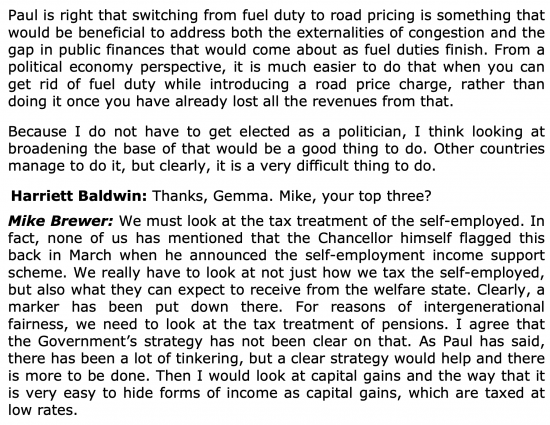 So what have we got? I summarise as:

In summary, the leading think tanks think that we need tax increases, and that the least well off in our country should be paying more tax to pay the price for coronavirus which has already been paid using quantitative easing, which does not need to be unwound. Meanwhile, capital gets an easy ride and the wealthy aren't to be impacted almost at all. It was a deeply depressing event.