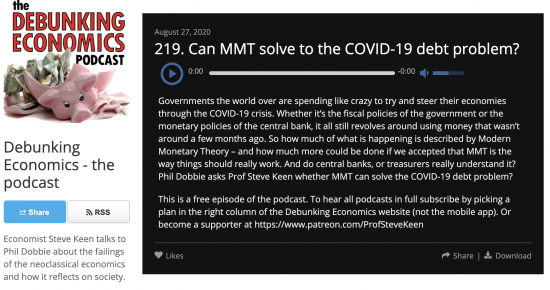 Debunking Economics was, and is still, the classic book by Steve Keen, which I consider essential reading for all interested in economics. When I first read it I had no idea that one day we would get to know each other and that he would, for example, be a regular re-tweeter of this blog, as I am aware that he is.

But there has been an issue: Steve did not 'get' MMT and its argument that spending creates the money to pay tax and fund what is called government borrowing, but which is actually the redepositing of the excess of government spending over taxes raised back with the government for safekeeping. And that obstacle meant that we could never quite agree.

And then he read The Deficit Myth by Stephanie Kelton, which is also essential reading. And he did some double-entry book-keeping to build a Minsky inspired model of the economy, which is available to sponsors of his blog. And the result is that he now gets that what Stephanie says, and what I've been saying for some time, is right: i.e. that the deficit creates money.

Money is not needed to fund the deficit. The deficit makes the money to pay for itself.

The bonds just tidy up the private sector, and bank, balance sheets and let it be pretended that the government is not lending itself money when that is what it actually, and inevitably, is doing via its own central bank.

And because Steve explains this new understanding on his part well in the discussion that takes place it's well worth listening to.

As for me, I'm delighted we're now on the same side.

Now to get Ann Pettifor and Frances Coppola to understand this.

And even Simon Wren-Lewis and Jonathan Portes.

Or is that too much to hope?