Scotland’s problem is not that its taxes are too low, but that its spending is just not big enough

George Kerevan has an article on Bella Caledonia in which he claims: 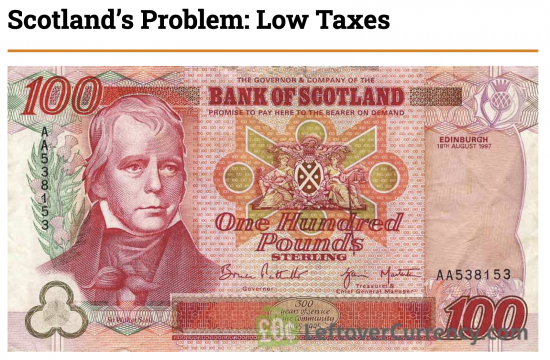 Is there anything new to say about the latest GERS figures?  Perhaps.  According to GERS, the nominal Scottish tax income was 65.9 billion, including North Sea oil revenues.  That works out at 37.4% of GDP.  Which by international standards is a very low slice of the national cake.  Which suggests that if an indy Scotland did have anything like the deficit claimed by the Unionist camp, the cause is not Scottish inefficiency or poverty. Rather, it is a function of the neoliberal British state and its obsession with low taxes.

The rest of George's argument is not relevant to what I have to say, and that is that George has his argument in reverse.

It's not true that there is virtue in taxing. But there is in spending. And as modern monetary theory explains, spend always comes before tax.

What George should be arguing is that Scotland should be spending more. And that if it did that there would be greater capacity to tax in Scotland, if that was the appropriate thing to do in response, which it may well be if inflation was to be avoided when Scottish full employment was achieved - which would be great thing to do.

And would that capacity for increased tax exist of the spend happened? I offer this chart which I prepared based on 2013 data that I put in my book The Joy of Tax: 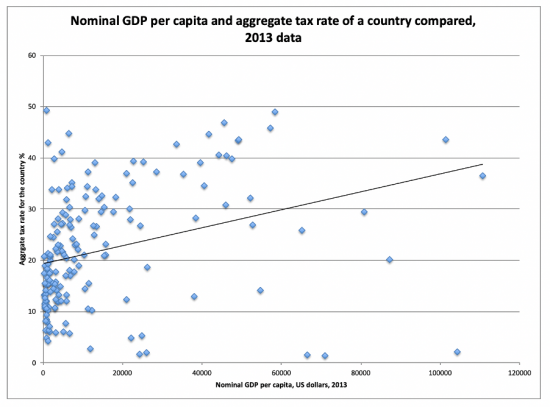 The evidence is very clear that as aggregate tax rate rises so does GDP. And as modern monetary theory makes clear, that's because the government will have spent more to make that aggregate tax rate increase possible, or the money to make payment of that tax would not exist. Simply, governments that spend create the growth in their economies that lets them tax more to keep it in balance, but it's the spend that comes first and the tax that comes second.

So George should not be starting his questions with debate on whether Scotland can, in the first instance, raise more tax because that is not what is needed. What those who want an independent Scotland should be doing is to discuss how the Scottish government might spend more most wisely to have the greatest impact on the long term prospects of Scotland, and to use borrowing powers to best effect before any chance to raise taxes is available. It will always be true that investment spending - so long denied to Scotland as the south-east of England has secured so much of government support - is the best way to go to secure this goal. It always has the best so-called 'multiplier effects' in terms of delivering a return for the spend made.

Scotland can and should be a higher taxed state in the future, but that is because Scotland needs more government involvement in its economy as it meets the needs of the people of Scotland as they transition to the sustainable world they need to live in. I could, of course, say the same of England, but they're not listening. That England is not thinking of doing this is no excuse for Scotland not to do so. If independence is for anything it is about delivering the very different economy Scotland needs. And people need to be brave enough to imagine what that economy might be.