Millions of people lost their freedom to move yesterday. And that’s not a cause for celebration

Tory MPs are rather triumphantly tweeting this image this morning: 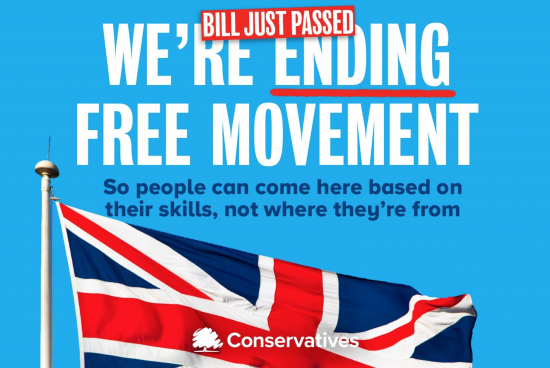 I have to admit, I think that is pretty sad. I use the term literally, and not as one of abuse.

It is sad that we have lost some of our human rights to travel. Because that is what this means.

It is sad that for many the option of living in Europe has now gone.

It is sad that a racist agenda has been promoted.

It is sad that the UK will no longer have access to some amazing people who wanted to live here, because it’s always the most innovative and risk-taking people who want to migrate, but those qualities are not (and this will be shocking to many Tories) correlated with wealth.

It is sad that we have sent out a message that we are closed-minded.

Whilst for the hundreds of thousands, and maybe more, who will be separated this is a disaster. The Tories have not learned.

It is sad that prejudice has prevailed.

It is also economically completely bizarre that we should want to do this. It will cost us significantly.

With an ageing population and low birth rate we need migration.

And recent migrants are extraordinarily hard-working - from wherever they come. That’s a character trait and nothing whatsoever to do with race.

The evidence is overwhelming that significant parts of the UK economy are dependent on migrants. And that migrants contribute significantly.

But all that is now to be prevented from happening.

Worse, if capital can move freely and labour can't then wages will be suppressed.

Worse still, millions of people in this country feel more vulnerable as a result, at enormous cost to their well-being. This triumphalism for some will look very much like persecution for others.

And why? To reinforce the idea of British exceptionalism, which is without foundation, unless prejudice counts for this purpose. That’s why.

Is that sad? I think so.

And it makes me very angry, to be honest, that we are ruled by a political party capable of such inhumane celebration of abusing others. That’s beyond sad. I think it’s disgusting.