The IFS is peddling its usual nonsense on macroeconomics this morning. In a new report

They make some predictions for the economy, most of which are already wrong since in their preferred scenario (in which they, somewhat improbably, ignore the possibility of a second wave of coronavirus) They assume, using the conventional measure of government debt which ignores quantitative easing,  that debt will not exceed 100% of GDP until sometime next year.

Using this scenario they plot the likely progress of debt as follows: 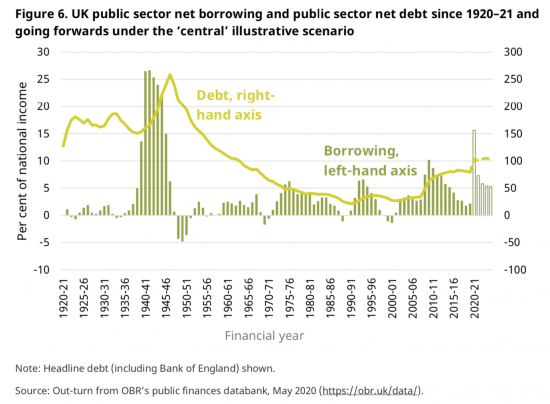 It would seem that they are trying to be reassuring. But what I am more interested in our their comments on interest costs. On this they say:

Furthermore, as long as the government can continue to borrow cheaply, it seems appropriate to be comfortable with elevated levels of public sector net debt. Indeed, under all of our scenarios, debt interest spending would be lower over the next five years than was forecast in March. A key risk with such an approach is that the cost of government borrowing may rise. This risk is particularly important to highlight given the Bank of England’s programme of quantitative easing, which has the effect of increasing the exposure of the public finances to changes in interest rates with borrowing being effectively financed at Bank Rate rather than being locked in at longer-term gilt rates.

This is where the IFS show their usual lack of reason coupled with their standard incomprehension of macroeconomics.

Let me explain the facts. The concern is that quantitative easing cancels government debt by buying government bonds from the private sector, to whom they have been sold, with the net consequence that the amount of cash in private sector banks increases. These are then held on what are called central bank reserves. These do not move precisely in line with the amount of QE that has been done, but they are clearly related. Since the Bank of England happened to issue its accounts to 29 February 2020 yesterday we have some up to date information on this. This is the amount lent by the Bank to buy QE debt at that time:

And these are the central reserve balances:

I should add that the actual value of gilts owned by the Bank is somewhat more than £445 billion, but that is a story I will come to: I mention it now to make clear that the assets more than cover the liabilities.

Now let's return to the interest point and the IFS claim (which I repeat from above) that:

This risk is particularly important to highlight given the Bank of England’s programme of quantitative easing, which has the effect of increasing the exposure of the public finances to changes in interest rates with borrowing being effectively financed at Bank Rate rather than being locked in at longer-term gilt rates.

There are several points to make. First, note what the Bank of England has to say in that note 11. It is:

The rate paid by the Bank on reserves account balances is also the means by which the Bank keeps market interest rates in line with Bank Rate. All reserves balances are remunerated at Bank Rate.

In other words, the Bank of England now has (which it did not have before 2009) a mechanism to enforce its bank rate in the market. What it will pay on the central bank reserves of banks and building societies sets the short term rate of interest in the economy. That create is not set by markets. It's set by the Bank of England.

And long term rates are also set by the Bank now. That's done via QE. I use this diagram on how QE is meant to work from the latest accounts of the Bank of England Asset Purchase Facility Fund Limited, also issued yesterday (same link as above) to illustrate this point: 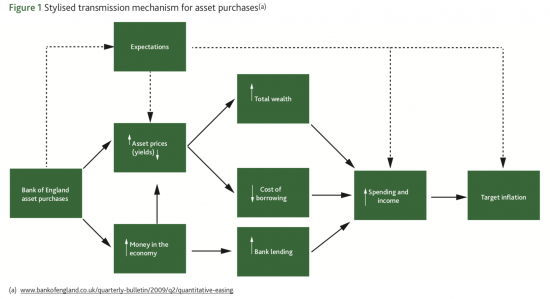 The aim of QE is to keep interest rates low.

So, both short and long term interest rates are under the control of the Bank of England now.

In that case, why would they rise, as the IFS think likely? Interest rates rise because of:

The first two I have already dismissed.

The third is unlikely: rates have been allowed to float down because of Brexit and the trend will continue.

The last is almost inconceivable: the pandemic and crisis is worldwide and no one is going to be increasing rates anywhere in the world to address it. In addition, the long term trend in rates around the world (we're talking a 500-year trend here) is downward: there is no sign at all that it is going to change. Indeed, negative interest rates are happening. And that is because the world is awash with savings: there is a glut because of the gross inequalities that exist in the world and no one wants to pay for them.

In other words, the chance of any serious rate rise is as close to nothing as it is possible to get. So what is the Institute for Fiscal Studies raising the concern for unless a) it can't follow this logic b) it does not know about it c) it's trying to create a risk that does not exist to support austerity? I think (c) the most likely, but who knows? However looked at, they're wrong: this is not a concern.

It's time that people realised that interest costs are not a concern whatever the level of debt right now and it's time that think tanks stopped saying that they are.