There are moments when a lack of understanding of how the government is financed is used as an excuse for supporting the oppression of vulnerable members of society. Take this tweet from Andrew Sentance as an example:

So, @MarcusRashford great to hear you speaking up in n favour of the underprivileged children who need school meals. Is it OK to raise the top rate of tax on yourself and other top-earners to pay for this? Let us know.

But he uses his ignorance to pretend that the government cannot afford to support vulnerable children unless the wealthy pay more tax.

So let me make it clear that no programme of government spending ever invented has been dependent upon the wealthy paying more tax.

It's true that controlling inflation requires that we tax the wealthy to reduce the amount of cash in the economy after the government has spent.

And it's also true that beating inequality requires that we proportionately tax the wealthy more than most people.

But paying for support for children who need a meal that their parent/s or carer/s cannot provide because of the gross inequality in our society has never required that we tax. The government can do that using Bank of England created money, just as it can bail out Easyjet using money made in the same way, or pay for anything else come to that, if it so wants. Becauses that's how government funding works.

I replied to Sentance saying this:

Do you have even the remotest idea of how government is actually funded Andrew, because if you had you’d know how utterly crass that question is at this moment and that all you’re doing is siding with those imposing poverty on kids who do not deserve it

Sentance replied with this: 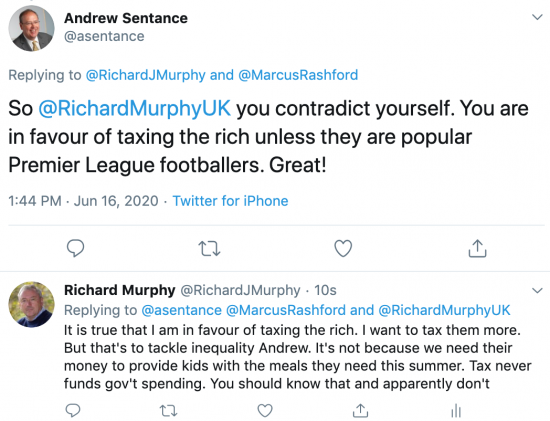 In effect he's saying that my position is sycophantic envy politics, when it's actually rational economics, a proper explanation of how government is funded and only reveals a concern for tackling inequality. He apparently knows nothing of such things, which we know because this was his reply: 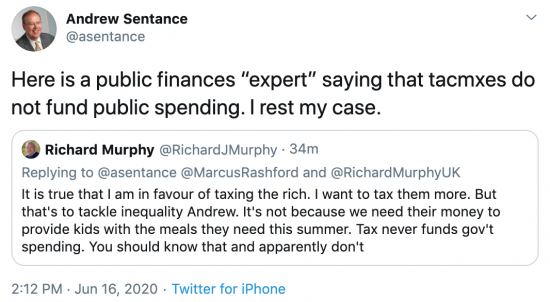 In response to which said:

I resigned from Cambridge Econometrics when they appointed Sentance as an advisor because I could not face working with him, as they wanted me to do. It's one of those decisions I haven't regretted.