Trump is so wrong

The FT’s email headlines for its UK homepage started this morning with four articles on the riots in US cities as protestors continue to defy curfews to make clear their anger at the death of George Floyd. 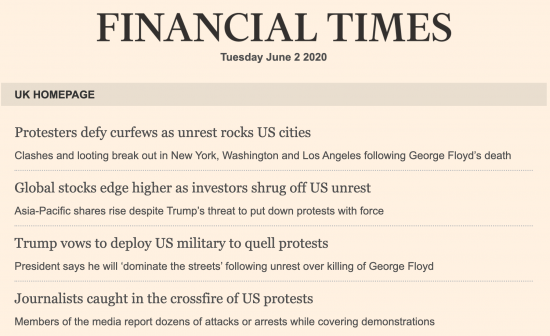 Another mail gave almost the same weight and added a new story: 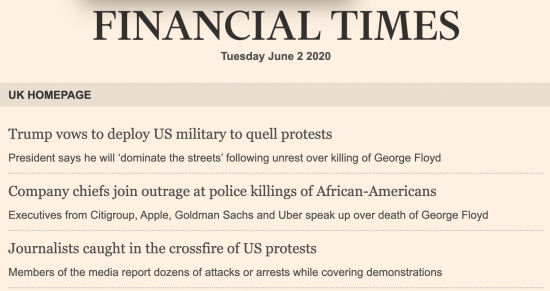 That is astonishing, because there is, very clearly, news to report in the UK as well. So what is happening?

Protests on this scale and with this intensity have, rightly, been triggered by anger at the murder of a man by a police officer, filmed as it was happening and as he pleaded for his life. In itself that is so shocking that the reaction is hardly surprising.

That many are appalled at the reaction of Trump to this murder is, again, hardly surprising. I was pleased to see the US Episcopal Church roundly condemning his use of one of their churches as a backdrop for a photoshoot by Trump yesterday, whilst he (rather sickeningly) held a Bible up as if that provided support for his actions. 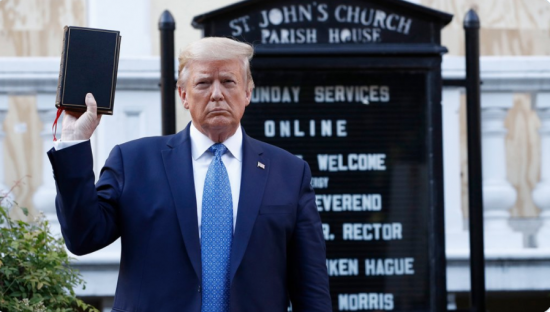 It does not. Just for the record, that’s worth saying.

Trump has always been about creating and reinforcing discrimination to ensure that a few benefit. He’s not the first politician to do that, of course. Nor is he, by far, the only one to do so in this world at present. But that is no excuse for his actions, or those of anyone else. All who pursue such policies deserve to be condemned. That the revulsion at his reaction is also so widespread is, I am sure, part of the reason why the FT puts the issue so high on its agenda today.

That, and something else as well. Because in these protests there is a threat, and it is to the likes of Trump. The financial system from which he and they have prospered enormously is built on the exploitation of billions of people the world over. Or rather, that and the exploitation of the planet on which we all live, where the entitlements are grossly unequally shared.

The protests over the death of George Floyd threaten Trump at a great many levels, and so he is reacting violently to them. And that they come as Covid-19 makes clear that nature is in charge on this planet, which in turn reminds the likes of Trump that climate change, which he so wants to ignore because it will also curtail all that he desires, just adds to his stress.

Trump may be right on one thing though. Maybe there is revolution in the air. The protests are triggered by anger, grief and disgust at the actions of a white man killing a black man as his colleagues looked on and did nothing. Nothing diminishes that. But the anger that has been released is one already there, and the demand for change is profoundly radical.

Trump, for reasons of his own, used the Bible as a weapon to support his cause yesterday. I’d remind him of these words in what is called the Magnificat in Luke chapter 1, which is attributed to Mary as she gives praise for the birth of her son. I have quoted selectively, I admit, to show how inappropriate his use of the Bible to support his cause really is:

My soul magnifies the Lord,

He has shown strength with his arm;
he has scattered the proud in the thoughts of their hearts;
he has brought down the mighty from their thrones
and exalted those of humble estate;
he has filled the hungry with good things,
and the rich he has sent away empty.

And yes, I know the criticism that anyone can find anything they want in the Bible if they really look. But this is at the very core of the Christmas story and it's sung as part of the Church of England and (no doubt) Episcopal Church liturgy, frequently. This is not, then from the margins: this is at the core of what the Church says, even if many ignore it.

Trump needs to worry. Such thinking is powerful. Perhaps they tore that, and many other pages, out of the Bible he used. But it will certainly not provide him with the comfort he was seeking. But whether you have faith or not, and I am not here to persuade anyone of anything, the history of such thinking is long and from sources far beyond the Church (just to make clear that I am not claiming any exclusivity for it: I am merely making the point that Trump is wrong to reference it) and it has to on occasion make itself heard very loudly and very clearly. It is in the USA right now. And rightly so, from the widest possible range of people who are saying enough is enough. And it is.