We don’t have to do anything now to manage the macroeconomic consequences of the coronavirus crisis, unless it is to issue perpetual bonds

Simon Wren-Lewis drew my attention to a survey by the Centre for Macroeconomics at the Centre for Economic Policy Research, published on 28 May. This asked a panel of senior macroeconomists two questions. The charts, below, summarise what they are.

The summary that the Centre published said:

Public debt has risen to unprecedented peacetime levels, due to policies put in to place to address the economic fallout from COVID-19. Nevertheless, the CfM panel was nearly unanimous that the Treasury should not take any action to decrease the deficit in the upcoming budget. The panel was split on when it would be wise to publically announce long-run plans to address the deficit and the debt. At that point, the majority of the panel supports a mix of financing options, with tax increases receiving strong support and not a single panellist supporting public spending cuts.

And as an explanation of their approach, they also said

The May 2020 CfM survey surveyed its panel of top UK economists on the urgency of addressing UK public debt and the ways to do so. 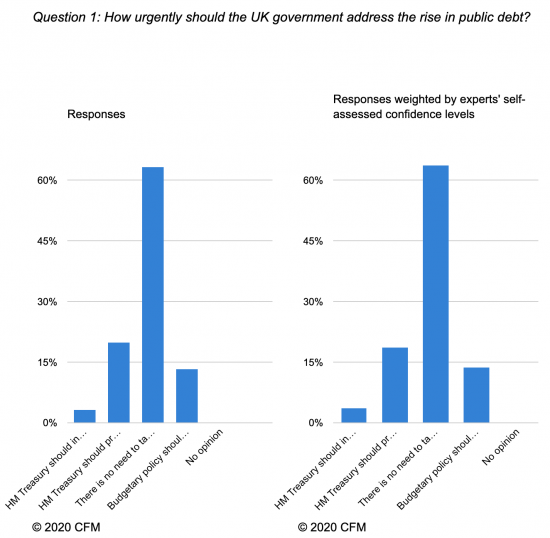 To elaborate, the four possible answers were:

It is very encouraging that the weight of opinion is on delay and current inaction. I would have chosen option 4, by the way at this stage, arguing that overall this was the right choice and that focussing on debt is the wrong concern.

The second question addressed this issue:

Almost all who said 'none of the above' answered that growth was the right answer.

I am sorry to see that tax increases were so popular: that cannot be the route to tax justice. Higher inflation was an entirely fair response. But the focus on perpetual debt - never to be repaid, and issued at current low rates was also encouraging. It would have been my choice, overall.

The survey responses are worth reading. but the good news is that there is widespread rejection of the 'we have to do something now' argument.