Financial markets are proving themselves to be highly irrational at present. Take the FTSE 100 as example. This is the chart for this year: 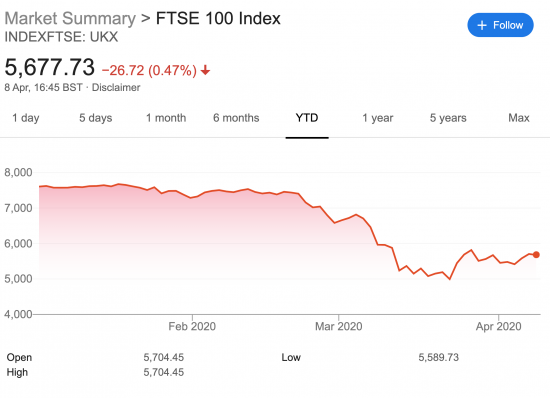 Markets were very happily over-valued by pretty much general consent at the start of the year. Coronavirus disturbed the cosiness of the arrangement. As people panic bought the markets panic sold. But now, every day the markets look for signs of reassurance - most of them provided by the clearly fabricated news on the number of UK deaths that dramatically understate what is happening that is issued by our government each day - and try to edge back upwards. Their belief is that it will not be long before we are 'back to normal'. The age-old belief that 'it will all be over by Christmas' (or in this case, the summer holidays), persists.

I'm not being so bold as to forecast when the threat from coronavirus might be over: I simply do not know, although I suspect it is not anytime soon.

What I can be sure of is that the impact of this crisis on markets is being significantly understated by those with short term mindsets who populate our financial services sector. They are still in for the most rude awakening. There are numerous reasons for thinking that this is the case.

First, there is the likelihood of economic depression, or worse. I have already explained why this will happen, and is unavoidable unless the government steps in with the most massive support, which fact it clearly does not comprehend as yet.

Second, the markets themselves are providing clear indications of underlying chaos that is simply not being reflected in the FTSE valuations yet. For example, Aviva has stopped pension payouts based on property valuations that no one can be sure are real right now. It has also been suggested that £52 billion of dividend payouts may be at risk of not being delivered because the companies due to pay them need to retain cash. Tesco is paying out, but based on a government bailout of £585 million: no one knows what the backlash to that will be as yet. Thi creates further uncertainty. And there remains the fact that the small business sector on which large business depends is simply melting away right now for lack of cash.

Thrid, despite this the discussion in the FT and elsewhere suggests that 'well-capitalised companies with strong balance sheets' (I paraphrase) will survive this. There is gross naivety in such claims that needs explanation.

My concern is that very few people in financial markets seem to have any understanding of balance sheets, or the transmission mechanisms that exist between them that make it clear that no company is now well capitalised in its own right: they essentially stand or fall largely as a whole now.

Under the rules of International Financial Reporting Standard accounting introduced by the International Accounting Standards Board at the behest of the European Union in 2005 assets on balance sheets ceased to be valued at their cost to a company, less any necessary provisions for their write down in value because of use or because prudence demanded it when there were real doubts as to actual worth. Instead, assets have been (in the main) valued at their market worth under 'mark-to-market' rules. So, land and buildings have been revalued. And goodwill can stay on the balance sheet without any necessary time limit. There has been a rapid growth in the ownership of assets of inherently uncertain value e.g. derivatives, intellectual proportty and financial products. In many cases there is no market for these products: they are valued by models instead. Debts are meanwhile stated at market worth, as are liabilities, which ash sometimes created the most bizarre accounting outcomes. And most especially, so too are pension fund liabilities accounted for in this way.

At the same time as this has been happening there is clear evidence that companies have been paying out their earnings as fast as they can. This is the issue I am looking at with Prof Adam Leaver at the University of Sheffield right now.

So there are two phenomena going on. One is that balance sheets no longer represent the activities of a company, as such: they represent the company's relative worth in the market as a whole. This means that what was once an indication of the internal strength of an entity has now become a reflection of markets in general. And second, companies have used the opportunities that rising market worth in asset valuations has provided to pay out maximum dividend payments. And at the same time, this process is exacerbated by its reflection in the valuation of their pension liabilities, which are inherently an indication of overall market values of equity, properties and debt, because that is what such funds own: they are possessors of nothing of real substance at all in almost any circumstance.

There is, then, no such thing as a well-capitalised balance sheet now: there is only a balance sheet that has been well positioned relative to the market. And there is an automatic transmission mechanism of uncertainty onto every balance sheet, and that is mark-to-market accounting. If that accounting  does not undermine the integrity of a comapny's accoutning in itself it will via its pension fund: there is no escaping.

Because we do not value what a company does any more, which is what historical cost accounting did, but instead simply treat the quoted company as an exercise in financialisation largely unrelated to the underlying activity that it actually delivers in its day-to-day operations, we have ended up in a situation where companies are not valued in themselves but as part of a system as a whole. We are, then, not only incapable of telling which companies are well capitalised, because there is no way of knowing on the basis of the accounting data now currently in anyone's possession, we may have no way of putting this right within the current accounting framework.

The result is that we are not just in a little financial trouble: we are in deep trouble. And at some point markets are going to realise this. The fact that we have created what is, in effect, a giant Ponzi scheme for the benefit of directors who have got rich quick on the basis of inflating their share prices using the mechanisms that International Financial Reporting Standards provided to them under the apparent guise of shareholder value accounting is something we, and markets, are going to have to come to terms with.

I am working with colleagues on this issue right now, and we are coming up with answers on how to address the issues that arise. But none of them are comfortable for markets, accounting and governments. We recognise that the supposed reporting of value that has underpinned accounting for the last fifteen years has in fact been the mechanism to disguise the wholesale destruction of that value. And sometime soon that is going to become apparent, when current uncertainty in property, share and debt values have to hit balance sheets.

No wonder regulators are giving companies more time to report their financial results right now: they know that if they were required to report at present the proverbial would hit the fan. But there is no delay that is now going to prevent that happening: fundamental asset revaluation will happen in the post-coronavirus world, and no company and no market is going to survive that unscathed because all their accounting is now about their market value, and not about their inherent worth, and the two are fundamentally different things. The probelm is that for fifteen years we have been measuring the one of least importance and have been treating it as paramount. And now that is going to catch up with us.