The continual creep of the UK towards dog-whistle populism and all that follows from it continues with the government's announcement of new controls on migration.

As the Guardian notes:

Britain is to close its borders to unskilled workers and those who can’t speak English as part of a fundamental overhaul of immigration laws that will end the era of cheap EU labour in factories, warehouses, hotels and restaurants.

They summarise the points system as follows: 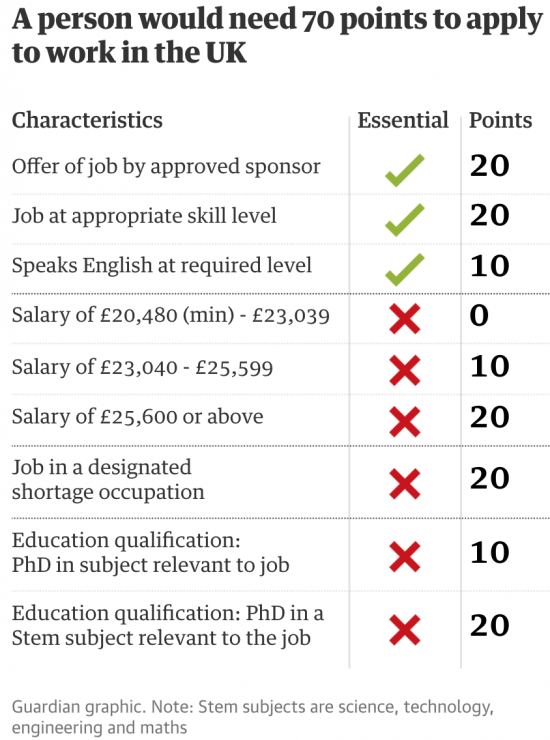 As the government says in its press release on the issue:

In line with the government’s manifesto commitment there will be no specific route for low-skilled workers. It is estimated 70% of the existing EU workforce would not meet the requirements of the skilled worker route, which will help to bring overall numbers down in future.

There will be those who say that this saves the UK from a breaking point, just as yesterday the government claimed that EU regularity non-alignment also achieved that goal, without evidence to support the claim.

Alternatively, as the CBI claims (with some justification), this will undermine the viability of many parts of the UK economy.

Brexiteers claim it does three things. It takes back control. It limits migration. And it will force up the price of UK labour, which will then be priced into work.

I agree that this will achieve the first of these two things. I really cannot see the price of labour rising significantly though: in sectors such as care and hospitality margins are already very small and there is strong price elasticity - meaning that capacity to pass on wage increases will be very low. It is more likely that we will see business failures rather than significant increases in the number of lower skilled workers already in the UK taking these jobs, which are already available to them.

The challenge that this move represents is, then, to the UK economy as a whole, where during any period of transition to whatever new labour rates emerge there will be periods of major disruption in some sectors.

These disruptions will, I suspect, be enough to have a serious impact on overall employment: it will not just be low paid jobs that will be lost as a result of this transition as whole companies fail.

And I suspect that this will also have a serious impact on growth in many low environmental impact and socially important sectors.

But there will be something, of course, much more important than that which will happen. Priti Patel has, I have no doubt, the intention of increasing racial tension when promoting this idea. The already commonly made claims that all who are not very obviously first language English speakers, let alone  from BAME communities, should ‘go back to where they came from’ will increase as a result of this move. Of that I have no doubt, at all. And I am sure that the promotion of that sentiment that this move will deliver is deliberate, even though as we know in most cases those targeted are British and have an absolute right to be here.

This government wants to promote the ‘otherness’ of Europe, at the very least. That will deliberately fuel racial tension, which they know already impacts very heavily on the lives of far too many in this country. To promote such a policy knowing its consequence, is an act of deliberate racism is my opinion.

I cannot  describe this move otherwise.

Our path towards fascism continues.

Theresa May’s once predicted Nasty Party not only exists, but is in power.

We could pay a terrible price for this.