Why the fantasy world of neoclassical economics is undermining our wellbeing

Peter Bofinger is professor of economics at Würzburg University and a former member of the German Council of Economic Experts. He has written an excellent, and accessible, article on Social Europe in which he explains why Keynesian thinking explains the world as it is, and neoclassical economics explains a world that does not exist.

At the core of his argument is this suggestion:

This is not minor. As Keynes himself put it:

I ... argue that the postulates of the classical theory are applicable to a special case only and not to the general case … The characteristics of the special case assumed by the classical theory happen not to be those of the economic society in which we actually live, with the result that its teaching is misleading and disastrous if we attempt to apply it to the facts of experience.

Bofinger summarises his argument in this table: 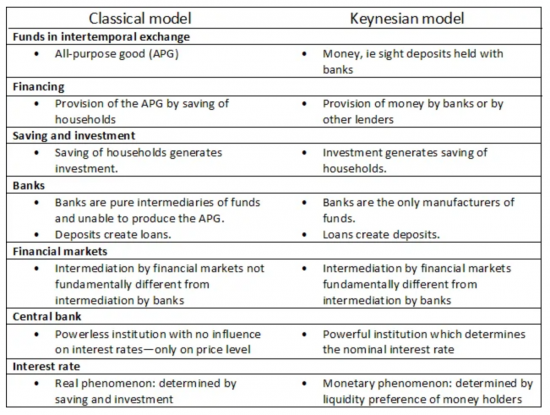 And then he notes:

But unlike in astronomy, this scientific revolution was successfully defeated by the classical paradigm. The representatives of the old regime carried this off with a brilliant move. They developed the ‘neoclassical synthesis’, turning the tables by presenting the Keynesian world view instead as a special case of the classical.

We have all paid the price for this deceit on the part of the neoclassical synthesis. And Bofinger makes it clear that this is no minor issue:

In the classical model there is no money. There is only one all-purpose good which can be used equally as a consumer good, an investment good and as a means of finance (‘funds’). In this model, saving—not consuming the all-purpose good—is the prerequisite for investment. Basically, the classical model is a model for a corn economy: households decide whether to consume the corn or to save it. If it is saved it can be supplied to investors who sow the grains, repaying to the households one period later the credit amount plus interest.

In the Keynesian model the ‘funds’ exchanged on the capital market are made up of money—‘funds’ are bank deposits. Funds are not created here by a renunciation of consumption but by the banks granting credit.

This is, of course, a claim that is also called to modern monetary theory, but let's ignore that for the moment. Instead concentrate on the suggestion that neoclassical economics presumes that there is no money, because that claim on Bofinger's part is absolutely right: most especially at the macroeconomic level neoclassical economics has no role for money, at all. Indeed, it simply does not exist in its models of general equilibrium. As a result a ruse is required to get it into national income accounting, precisely because in most macroanalysis banks do not add value, which they and those who claim to adhere to this method of thinking would rather not acknowledge.

There are practical implications as well. Neoclassical thinking has an obsession with saving, as result of which billions of pounds are spent each year subsidising those who are already wealthy, and more than 80% of all financial assets are held in tax incentivised accounts, whether that is appropriate or not. This is because that neoclassical thinking does, as Bofinger suggests, promote the idea that this is the basis on which investment takes place.

And yet, we know that is not true. Simple observation of markets shows that it is credit and not saving that funds business. And we also know that credit is no more than a promise that is recorded by a few keystrokes in a computer, and that money is created as a result.

This difference is not then minor: it is fundamental. As Bofinger puts it:

The classical model is therefore not a representation of the long-term laws of economic motion. It is the representation of a fantasy world whose laws of motion have nothing to do with reality. With these opposite laws of motion, a synthesis of the classical and the Keynesian model is as flawed as an attempt to combine the models of Ptolemy and Copernicus. In fact, Tycho Brahe (1546-1601) tried a similar synthesis (the Tychonian system) but, of course, it failed.

We are living with that failure still. And it is why neoclassical economics continues to help destroy us, our economies and our planet. And it has to go.