Assetisation and the end times of neoliberalism

I noticed a new book announced by MIT Press yesterday. It is: 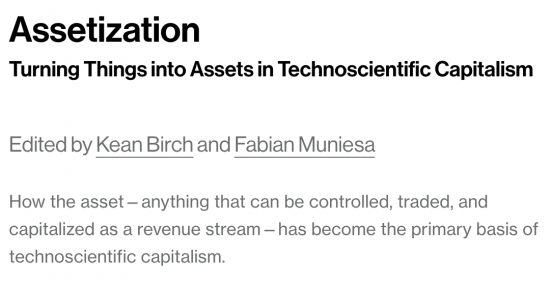 In this book, scholars from a range of disciplines argue that the asset–meaning anything that can be controlled, traded, and capitalized as a revenue stream–has become the primary basis of technoscientific capitalism. An asset can be an object or an experience, a sum of money or a life form, a patent or a bodily function. A process of assetization prevails, imposing investment and return as the key rationale, and overtaking commodification and its speculative logic. Although assets can be bought and sold, the point is to get a durable economic rent from them rather than make a killing on the market. Assetization examines how assets are constructed and how a variety of things can be turned into assets, analyzing the interests, activities, skills, organizations, and relations entangled in this process.

The contributors consider the assetization of knowledge, including patents, personal data, and biomedical innovation; of infrastructure, including railways and energy; of nature, including mineral deposits, agricultural seeds, and “natural capital”; and of publics, including such public goods as higher education and “monetizable social ills.” Taken together, the chapters show the usefulness of assetization as an analytical tool and as an element in the critique of capitalism.

Let me be clear, I have not read the book. I am not offering anything more than this blurb right now. But what I can say is that the issue is a real one.

The fact is that assets are 'created'. Many are synthetic. They transfer value, nonetheless.

And it can be said that the creation of these 'assets' is now the focus of modern capitalism.

This then defines modern capitalism as a mechanism for rent extraction, and not profit-making.

And what that means is that value creation has ceased to be what markets are about.

No wonder we are in the end-times for neoliberalism.

The big question does, however, remain what the alternative might be. When the asset owning class are aligned in seeking to preserve their privilege, and manage to align many others with them through pension funds and such arrangements, breaking this pattern is one of the great challenges we face.