I attended a fascinating conference on alternative accounting at the University of Leicester yesterday. I was there to present sustainable cost accounting, but since I have shared most of the slides I used on this site before I will not do so again now. Instead I offer a couple of reflections.

One is based on a discussion I had with an academic publisher during the lunch break. The discussion was on why there were no practitioners at the event, as far as I could tell. I outlined a chart that looked something like this that suggested an answer: 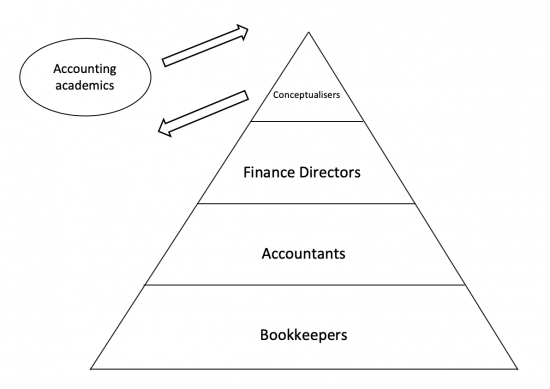 The pyramid is the accounting profession. Qualification might increase as one rises up the pyramid. What is also likely is that intellectual curiosity about accounting also does. But my point was that almost none in the bottom three tiers ask why they do what is asked of them. They data process, prepare accounts and ensure compliance with accounting and maybe other standards e.g. on tax, without really asking why they might be doing this. They deliver the product that the standard setters within the profession demand of them; reluctantly (usually) updating themselves as to the nature of these demands from time to time, but rarely questioning them as there is little incentive for them to do so.

In contrast, conceptualisers within the practicing profession, who think how to shape standards, are few in number. There are two reasons. The first is that there is very little time for many to undertake this activity. Second, outside the very largest firms there is even less reward for doing so.

Those that partake in this form of thinking - on just how accounts should be presented - are drawn almost entirely from the ranks of those large firms. And because there is pressure on them, like all partners in those firms, to earn a return their conceptualising is dedicated to matters that might earn that return by addressing issues that might suit the needs of their clients. And so we end up with, for example, the vast amount of effort that has been dedicated by the profession to accounting for derivative contracts when (let’s be honest) there is no such thing as a derivative beyond its contractual form. It is an exercise in ‘make believe’, supposedly designed for the purposes of mitigating risk but at least as often, I very strongly suspect, used to transfer value across borders with a very significant chance that tax saving results as a consequence.

The only other people engaged with this conceptualisation are academic accountants. Some of them  are, in reality, as dependent on the big four and their client focus for their funding as any senior employee or partner of such firms, and so they tend to produce argument to support the structures those firms support. They are best described as facilitators rather than conceptualisers in my opinion.

And others, who are those I was certainly with yesterday, and are those who I have always been most likely to meet throughout my career, think almost wholly differently to those I call conceptualisers in firms. The questions that these academics ask - on the relevance of accounting, for whose benefit it is organised, how it might best communicate information, and to what end effect - frequently address issues that almost all in the profession thinks settled.

It has, for example, long been the settled opinion of accounting standards setters that all accounts, whoever might prepare them, for whatever reason and whatever their size or ownership structure, are prepared solely for the benefit of the suppliers of capital to reporting entities and then solely with regard to the decision that those suppliers of capital must make as to whether to engage with the reporting entity or not, as if this is a ‘take it or leave it’ decision to be taken in a moment in a way only possible in a very limited range of financial markets in which almost none of those entities are engaged. No other possibility is considered. The matter is resolved.

In support of my comment I noted something called ‘The Corporate Report’ issued by the Accounting Standards Steering Committee in 1975, and still available on the web site of the Institute of Chartered Accountants in England and Wales. Based on that work I argue, as they did, that there are at least six stakeholder groups for accounts:

1) Suppliers of capital
2) Trading partners, both suppliers and customers
3) Employees, past, present and future
4) Regulators
5) Tax authorities
6) Civil society in all its various forms.

In 1975 the profession thought the needs of all these groups should be met by accounting standards. It is fair to say that it has never done so ever again.

To conclude my first observation then: the arrows in my diagram suggest that these two groups fail to address each other because what each considers important is unimportant to the other. Firms want to reinforce the framework they work within, in which they have considerable intellectual capital invested, the value of which may be challenged by alternatives. The alternative thinking academics raise questions that the conceptualisers in firms will suggest are not even about accounting at all. They have sought to define what is normal: the ‘alternative’ accountants do, as Prof Ian Thomson pointed out yesterday, make the mistake of conceding that right to define to them when in fact it is current professional thinking that is abnormal by seeking to address only a tiny part of the audience for accounting data whilst ignoring many of the issues of real concern, such as climate change.

And, secondly, this matters. Firstly, that is because most accounting undergraduate courses are constrained by the need to supply exemption from the profession’s exams. This means they deliver a very narrow curriculum that has little relevance to wider society and instead reinforces the view that accounting has this narrow scope. So as my friend Prof Atul Shah eloquently argues,  the curriculum offered is far too narrow to permit a real understanding of what accounting, accounting based decision making and professional ethics in far too many cases. The consequence is that we get accountants who simply accept the status quo, unthinkingly, because they are told this is 'normal' when it may not be so.

Second, we get frustrated accounting academics, I suspect, and that is not good for the profession or academia.

The answer is obvious: accountancy needs to open its mind, a great deal more than it is at present. The world faces the most enormous challenges created by a so-called 'normal' economy that is very clearly abnormal, and failing.  Unless accounting manages to do this we are in trouble. And it has to do it very quickly. Whether it can is one of those great questions for our times.