Helicopter money is the last thing that we need

This morning's Telegraph main story (care of a BBC tweet) is: 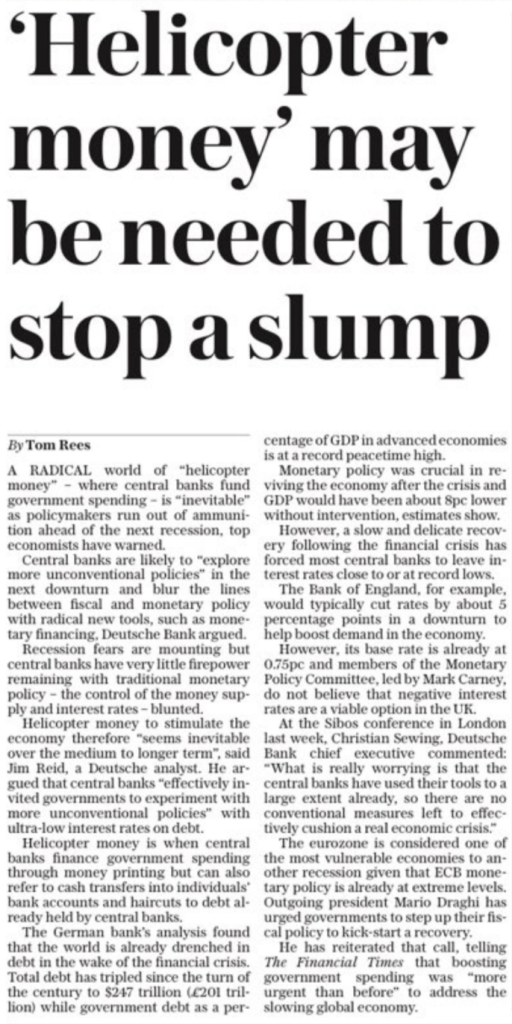 Let's be clear about this: there is no case for helicopter money.

Helicopter money is a Milton Friedman idea. Do you need any further explanation as to why it is wrong? What he proposed was that new government money - created for the purpose - be effectively given free to all members of the population to stimulate demand in the face of an economic downturn. As daft ideas go, this ranks high up on the list of bad ones.

Firstly, this is because this policy is indiscriminate. There are occasions, I admit, when universal benefits make sense. This is not one of them. If the aim is to stimulate demand then giving additional cash to those who are already saving, which is what the largest earning part of the population will already be doing, makes no sense at all.

Second, for those who think that this is equivalent to universal basic income, it is not: there is no commitment to perpetuate it, meaning that as a policy tool for addressing the issues that UBI deals with it also fails.

Third, and most importantly, this policy simply stimulates demand. Ignore for the moment the fact that this is exactly what we do not need if we are going to have a Green New Deal, and instead simply appreciate that there is no job creation element to this programme: it is instead a mechanism to suck in imports. Almost all the multiplier effect from such a proposal will, then, arise outside the country that starts the programme. It is an exceptionally poorly targeted program as a result, with very low multiplier impacts.

Fourth, if the aim is to instead create jobs, lasting prosperity, a Green New Deal and strong local multiplier effects by having the impact of government action revolve within local economies then helicopter money is the last thing that you would do. You would, instead, create a strong programme of investment, locally focused, requiring large inputs of local labour, with lasting local benefit, and a strong job creation focus. The Green New Deal policy of ensuring that all 30 million properties in the UK are energy efficient by 2030, with as many as possible turned into power generating units, is precisely that type of activity that we need. It is, quite literally, the polar opposite of helicopter money: it would create prosperity rather than a consumer boom, and would have low or no inflationary impact because the resources are available in a downturn for the programme to be undertaken without inflation risk, whilst as I have shown, there would probably be no tax cost because the entire investment programme could be funded by reallocation of existing financial capital.

So The Telegraph has this wrong. So too is Deutsche Bank (a failed entity if ever there was one), which is promoting it. And so too was Milton Friedman the thinking the bizarre idea up in the first place. Might we forget this idea now?