As the FT notes this morning, an IMF report authored by Jannick Damgaard, Thomas Elkjaer, and Niels Johannesen of Copehngane University has suggested that:

A large proportion of the world’s stock of foreign direct investment is “phantom” capital, designed to minimise companies’ tax liabilities rather than financing productive activity, according to research.

Nearly 40 per cent of worldwide FDI — worth a total of $15tn — “passes through empty corporate shells” with “no real business activities”.

The trend is growing: 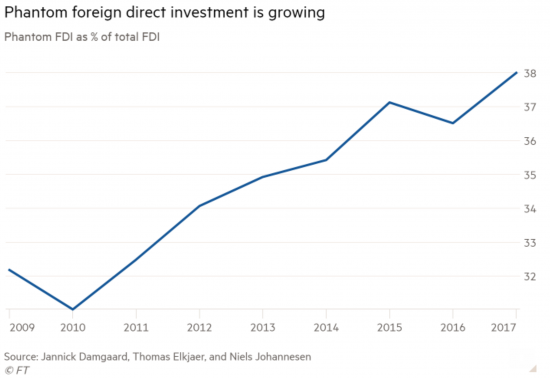 Why is this when all the pressure is on companies to pay tax in the right place?

I think there are three reasons. One is pressure from the deal advisors - the Big 4 accountants and big lawyers - who have simply not believed the trend in pressure on corporations.

Second is cost: doing this is actually fairly cheap compared to the billions that a deal costs in a great many cases. So companies are hedging their bets and saying that if necessary they can not sue these structures if that's what's right in the future.

And third, they really did not believe that things like country-by-country reporting, which expose profit misallocation would really happen, or ever become public, which I now think will happen in the not too distant future. So they thought they could get away with this. They're wrong: it's being found out.

I'd actually describe this as the death throes of old-style globalisation. I may be wrong, but I think the pressures to change are now becoming unstoppable and that this trend will change.