The burden of financialisation: a case study of a Scottish police training centre

Much of what I am noting in this blog comes from a recent submission that John Christensen and Nick Shaxson of the Tax Justice Network have made to Parliament on wealth inequality in the UK. Their argument is, in essence, that London does as a result of the excessive financialisation of the UK economy drag money out of all parts of the country and record it in the City and the surrounding area. They use an example that TJN has not highlighted on its website but which I think well worth promoting. As they put it:

In July 2002 HRH Prince Charles opened the Strathclyde Police Training and Recruitment Centre in East Kilbride in Scotland. Now renamed the Police Scotland College at Jackton, the project was part of the Private Finance Initiative.

Latest official data record the project as having a capital value of £17 million (though news reports said the project cost was £27.5 million.) However, the same official data show a stream of payments to the company delivering the project of £111 million over the 26-year financing life of the project.7 This fourfold to sixfold disparity between project capital cost and total repayments is only partly explained by standard discounted financing costs: it would have cost the government roughly £35-50 million had it financed the capital value of this project by issuing a bond paying five per cent interest, and used the proceeds to pay private contractors directly.

Such discrepancies are common for PFI, which is widely reported to be delivering poor value for money: “one hospital for the price of two,” as one expert has put it, with “grotesquely high returns on equity”. It is also well known that excessive financing costs go a long way towards explaining the high costs of PFI projects. However, a more forensic exploration of the corporate structure and financial flows involved provides useful new regional perspectives.

The equity holder for this particular PFI project was officially recorded in the government’s 2016 database as “Strathclyde Limited Partnership,” whose corporate structure — and this is a simplified version of the full ownership structure – went as follows (it is not necessary to do more than a skim-read in order to get a sense of it). 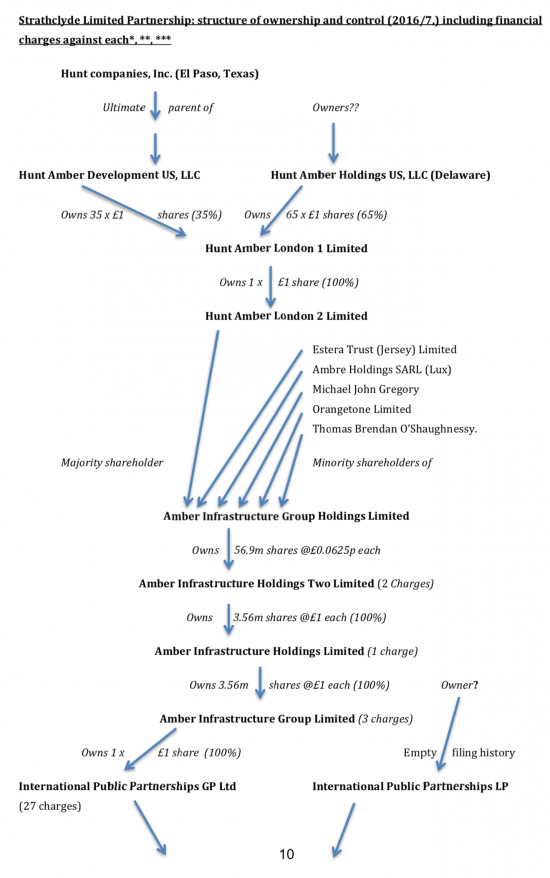 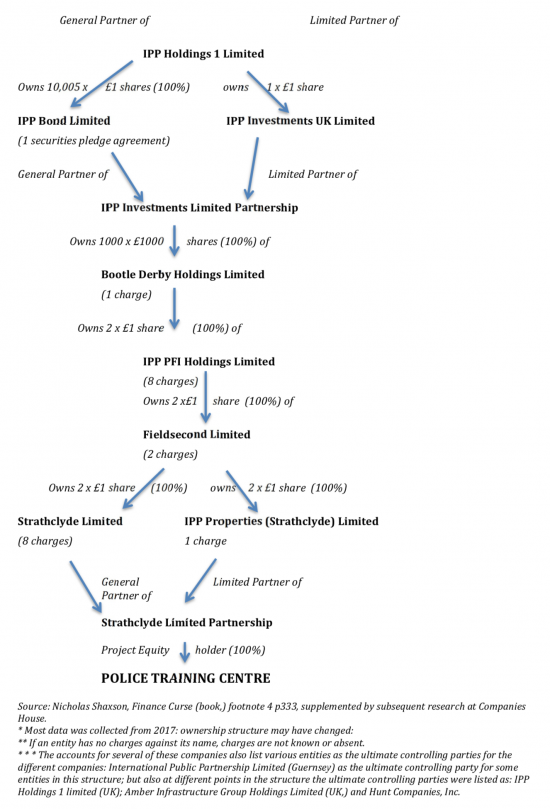 As Shaxson and Christensen add:

Nothing remotely illegal is being alleged here. Yet it raises an important question: what is the purpose of this astonishingly complex corporate tower sitting atop a police training centre in Scotland?

The shortest answer is that this is a classic example of the financialisation of apparently mundane parts of Britain’s economy. As explained below, this is not an outlier: it is increasingly the way business is done.

Such structures serve several purposes. Some may involve genuine wealth creation, such as the generation of economies of scale, the provision of investment finance, and the efficient pooling of resources. However, alongside these gains, many other, more extractive activities are evident.

Overall, the general purpose of such complexity is for the owners higher up in the corporate tower to obtain maximum possible rewards from a particular arrangement, while shifting maximum risks onto others’ shoulders.

I agree: that is precisely it.

And imagine just how much more efficient our economy could be if a police training centre did not have to bear the burden of all that financial admin, the burden of which all does fall onto the state?

I know PFI is ceasing to be used. But the message is clear: these structures have got to go. I have long argued that QE could be used to fund this at fair value, and stand by that argument now.