The UK government can borrow at record low rates, but don’t expect it to do so

The UK ten year gilt rate - the benchmark for the cost of government borrowing - reached a record low today of less than 0.5%. This is how the FT has plotted the rate: 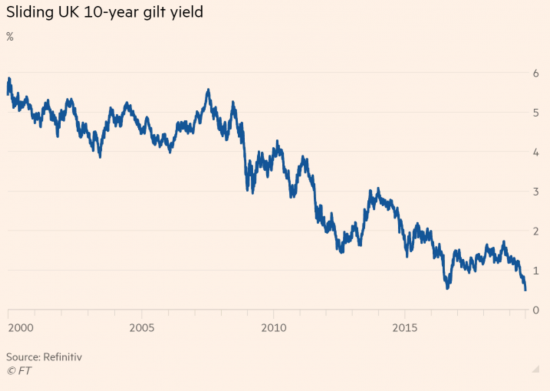 The last time the rate got this low was after the EU referendum: now it's back in the same doldrums as it hit then.

The rate is, of course, a reflection of the market's lack of confidence in a successful Brexit outcome. In effect money is flooding into gilts because the markets think business is going to be hit hard by Brexit, and so they're fleeing for safety. That's lesson one from this.

Lesson two should be that the government should be planning to borrow in a serious and coordinated fashion to exploit this opportunity, which effectively means that borrowers are willing to pay the government to hold their money. But there's no sign of that. Boris might say he's going to 'flash the cash' but 'serious' and 'coordinated' look like asks beyond this government's capability.

And so the economic mayhem will continue.