The US government is profiting from money laundering

The FT published this chart this week, noting that for the first time the value of US $100 bills in circulation exceeds the value of $1 bills: 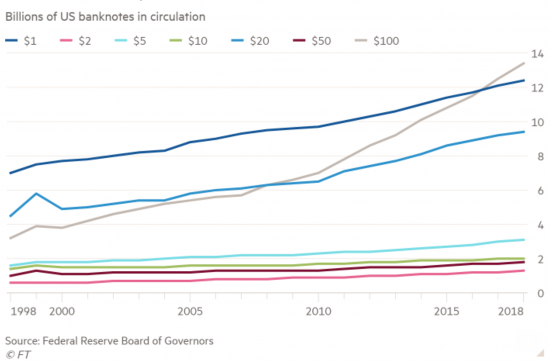 What really interested me is the fact that maybe 80% of these $100 bills are thought to circulate outside the USA.

Former Treasury secretary Lawrence Summers has called for the $100 note to be scrapped to frustrate illicit activities, a move reminiscent of the European Central Bank’s decision in 2016 to stop producing â‚¬500 notes with the same aim. But the cost of replacing the $100 note with more $50s and the cut in seigniorage, the profits a government makes from issuing currency, have hindered efforts.

So the US government ould rather profit from money laundering than take the bills out of circulation.

Which says rather a lot, I think.