There is a false narrative spreading about the European election result. It is that Britain has been swept away by the Brexit Party.

This is the actual result: 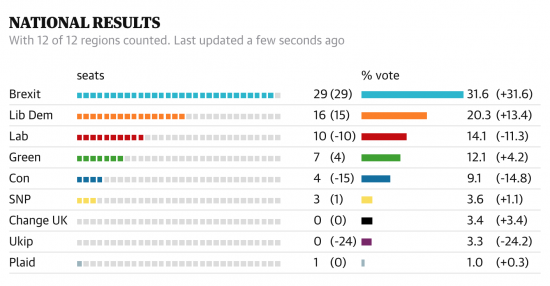 That result, though, represents England in the main. Scotland looked like this: 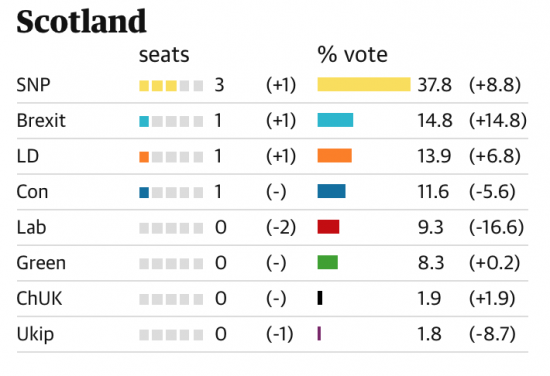 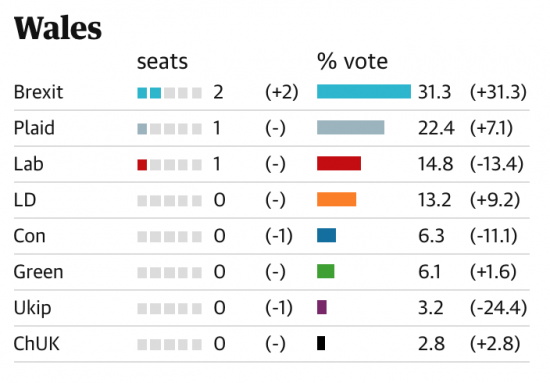 Standing back, the big story is not about Farage. He increased his vote nationally by 4.1% compared to UKIP last time. It was 4.3% in Scotland. And 3.7% in Wales. This was hardly spectacular given the massive increase in interest in Europe since 2014. I'd go so far to say that it was almost predictable. So that is not the story from last week.

Nor is the strong Remain vote the story, of itself. Clearly Remain won: the simple maths shows it. And there is no doubt that is the message many (me included) wanted to deliver.

And yet that’s simplistic. The assumption is that those opposed to Brexit will go back to where they were in a general election. I now doubt that. I am not saying none would. I would be astonished to see this result in a general election. Some Brexiteers would return to the Tories when they have a new leader. I have no doubt about that. And some Labour voters might be persuaded that Corbyn now thinks a second referendum a good idea, but given how vague the commitment is I am not too sure how many that would be right now. And I fear the Green vote will collapse in first past the post, which I deeply resent and regret. I cannot say the same for the demise of Change UK. But allow for that shuffle and what do you get? Maybe four parties on around 20%. Locally people will vote tactically to keep out the Brexit Party, maybe, at least on the left. I would. And the answer is still that, outside Scotland, there is no clear leader in all this.

Leaving aside the sure-footedness of the SNP, and Plaid’s growth, we have Farage, two parties failed by ideology and nascent alternatives hampered by first past the post, where anger will require electoral reform sooner rather than later.  It’s not a recipe for current stability. It suggests no chance of managing any consequence of Brexit, which is a very good reason to stay. And nor, right now, does it suggest much chance of delivering climate reform. But what it does clearly suggest is that any positive and big idea is now beyond the old mainstream and far-Right.

Put that together and maybe, just maybe, we are seeing the start of the re-birth Gramsci thought would always result from political chaos. Whether I am being optimistic is something for time to tell. But I cannot see a Tory recovery when the Tory ethos is dead. And right now those who have fled Labour have done so for a reason, or rather, reasons. They want radical politics. But not those of the old far-Left. This is the time for the new. Maybe it will happen.