This morning the situation is not good, but nor is it entirely hopeless

Council elections are, as we all know, only approximate indications as to voter intention in general elections. The variation in Labour’s performance in 2017 proved that. But they Nonetheless,  a useful barometer of opinion. And this is the, still very incomplete, state of play on yesterday’s elections as at about 6.30 this morning: 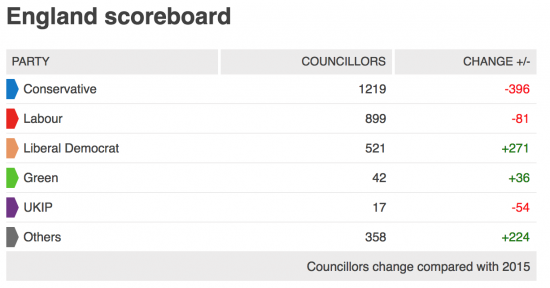 What does it imply? First, the good news. Even with no Brexit Party in the fray the UKIP vote is being shredded. That is unambiguously good news. Although the fact that 17 have still been elected is worrying.

Second, the Greens have to be pleased, but it is still disheartening that people do not take the climate change issue seriously enough to vote for the only party who is really serious about it.

Third, the rise of independent candidates is extraordinary. They have all too often been Tories in disguise in local elections, so I am a little wary, but if analysis proves otherwise then this ‘break the mould’ mood may be very significant.

As is the rise of the Lub Dems. With Tories and Labour both committed to Leave where else are Remainers going? I think the trend might be even stronger if there was a general election. I am not suggesting the LibDen# have much to offer. But they’re very definitely back in the protest vote market.  And right now that’s a good place to be in because there is ample to protest about.

Of course some of that is aimed at the Tories, but still people vote for them. I really struggle to work out why, and in which parallel universe where all is milk and honey and the vicar still opens the the local Conservative fete these electors live. Do they have any comprehension of political reality, I wonder? This party is a wreck, and not remotely conservative, and they still vote for it.

And Labour? At a time when it should be picking up seats - not least because 2015 was hardly a high point for it - it’s losing them. It takes staggering inability to achieve that. There are three possible reasons. The first is that no one still knows what Corbyn is doing, and so they will not vote Labour. The second is Leavers loathe him for that indecision. The third is Remainers loathe him for that indecision. I suspect all three are simultaneously true. At a strategic level this speaks only of failure. Whatever the hopes for the Corbyn project were - and they did exist, as I well know - I think it’s fair to say they are no more. This is a party ignoring its members and the electorate simultaneously: it’s never going to win with anyone from there. For the Left that’s sad to note.

Where does that leave us? I stress, not all results are in and my opening caveat stands. That said,  Remain parties  have done well. The major parties have left them. The Remainers have left the major parties. I am not sure how much else is certain, excepting that UKIP does look a spent force: sans Farage and with the very far-right in tow their vote collapsed, even without the Brexit Party dusrupting the field.

Will the Brexit Party change anything? Yes, in the euro elections. And that will be it.

Thereafter? I can see no Tory alternative PM and no Labour position change (or even position) that can revive either fortunes much for now. So England is destined to still fight over Brexit. I think you can be sure election systems will now also be the focus of much debate as two moribund parties struggle to hold on to power. And meanwhile, Scotland will take note and go its own way. The Northern Ireland vote may well be telling on sentiment on that issue when they come.

We’re in limbo, but the direction of travel is clear. Brexit parties are in trouble. And given that is both Labour and Tories, and the Brexit Party will punish both, the opportunity for change is real from the more radical and Remain side. The situation is not good. But nor is it entirely hopeless