The time has come to nationalise auditing

The problems within auditing in the UK (and I strongly suspect elsewhere) were highlighted yesterday when the fifth largest U.K. firm, Grant Thornton, was fined for serious breaches of the code of ethics relating to auditing. As the BBC reported:

Accounting firm Grant Thornton has been fined £3m by a watchdog for misconduct over its audits of Vimto-maker Nichols and the University of Salford.

This related to former senior partner Eric Healey joining the two organisations' audit committees despite being employed for consultancy work.

A Grant Thornton spokesman said it had fallen short of expected standards.

The FRC fined Mr Healey £200,000 - discounted to £150,000 on settlement - and excluded him from the Institute of Chartered Accountants for five years.

The issue is incredibly important at a time when the whole future of auditing is under review because what it makes clear is that the problems within the auditing and accounting profession do not exist solely in the Big 4 firms:  they extend well beyond that as well. In that case to pretend that the problem of auditing can be resolved by simply expanding the market to include the likes of Grant Thornton is just wrong.  All that will happen is that the conflicts of interest and the lack of professional judgement that underpin all the issues that are arising will be spread a little wider.

There is a solution. That is to nationalise auditing. As Anthony Hilton said in the Evening Standard a week ago: 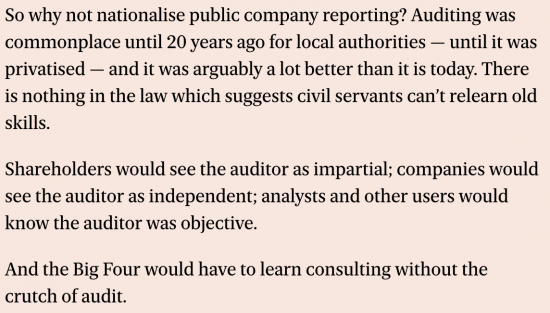 I agree with him. The time has come.

And let's be clear - there would be no problem recruiting suitable people. The NAO can do it already. So too could they if the brief was expanded.