The job of the Bank of England is to keep inflation on target at 2%. In their inflation report they admit:

The prices of the things you buy have been going up by more than our 2% target on average over the past year.

That’s been mainly due to the big fall in the pound following the Brexit vote.

The lower pound has meant that things businesses get from abroad cost more. Businesses have been passing those rising costs on to their customers. So that has meant higher prices in the shops. Most of the increase in prices due to the fall in the pound has now happened though.

The price of oil on world markets has also risen over the past year, pushing up prices for petrol at the pumps. Because of that, we think inflation picked up a bit in July.

But unless oil prices keep on rising, inflation should continue to fall back towards our 2% target.

And they evidence this with a chart: 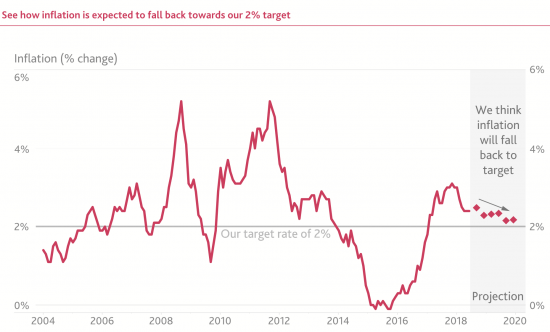 In other words, there is no reason for an inflation rate rise. And as external cost pressures are falling (as they admit) this is unlikely to change.

And as Mark Carney is saying, as I write, investment growth is subdued; Brexit uncertainty remains; consumption growth is modest and below trend. And wage growth is hardly significant, and right now remains below inflation, although he suggests he expects otherwise.

So what is the reason for the interest rate rise? There is none, bar pride motivated by the fact that there has been no real rise since 2008. The charts supplied by the Bank show this. This is on growth: 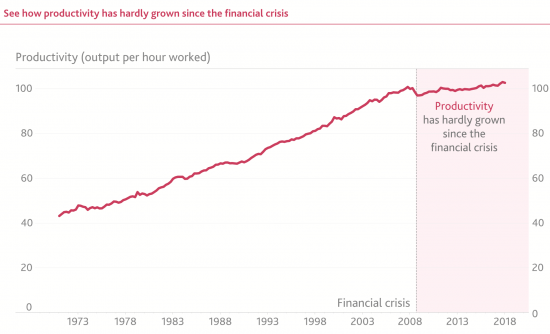 They use this image: 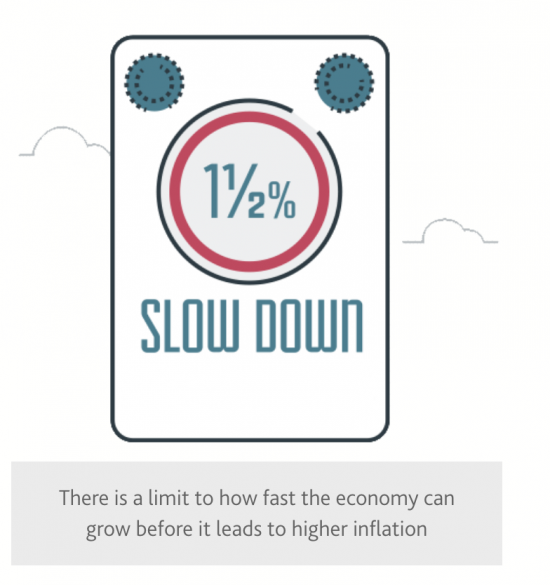 Growth is simply not on the cards, in other words, in their opinion. The claim that the economy is going to overheat is, then, just wrong, unless it is assumed that the sluggish economy we now have is as good as we are ever going to get. Maybe that is the Bank's assumption. If an advert for the fact that neoclassical economics has failed then this is it, in its own terms. But however looked at, this is not the cause for an interest rate increase.

So move on to wages. The Bank is clearly very worried about this. They say we are at full employment:

The share of people out of work is at its lowest level for more than 40 years. And there are a lot of job vacancies. This means that companies need to compete hard with each other to recruit and retain workers. One way they do that is by offering higher pay.

The pressure in the jobs market means we're expecting to see bigger, more widespread pay rises in coming years.  That greater spending power should support growth in the economy.

They support it with a chart: 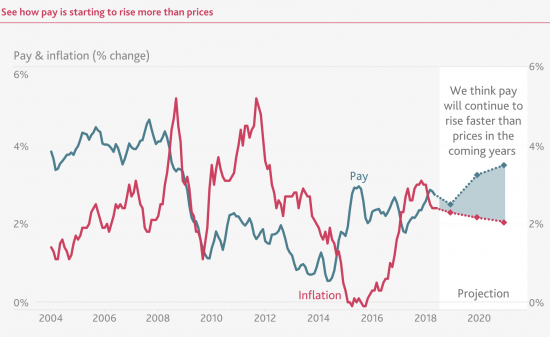 The only possible explanation for this is that they think so few people will be coming into the UK over the next few years that the supposed Brexit bonus for UK based employees must be killed off at birth by strangling the effect of pay rises that those who cannot make ends meet, and so are borrowing at record levels, might enjoy. You could not make it up.

You could not also make up the fact that the Bank clearly thinks the current type of low paid, insecure employment that so many are suffering will be an ongoing fact of life. That's deeply depressing.

But let me be candid: they don't really believe this. If they did they would not say that they think there might be scope for another three interest rate rises of 0.25% over the next three years, which is the most modest version of them 'taking back control' that they could possibly conceive of if the policy of central bank control of the economy is to retain any credibility at all.

So my suggestion is that this rise has nothing at all to do with economic facts. It has everything to do with bankers' egos. And we have seen the consequences of them running out of control before.

That is, yet again, my best advice.