How to start a new country: a lesson in the practical politic of thinking from scratch

I only occasionally do book reviews in this blog, largely because I am not the world’s greatest reader of them and so do not often think about writing them. But there have to be exceptions. In the last day I have speed read two versions of the new book by Robin McAlpine from the Scottish think tank Common Weal entitled ‘How to start a new country’. 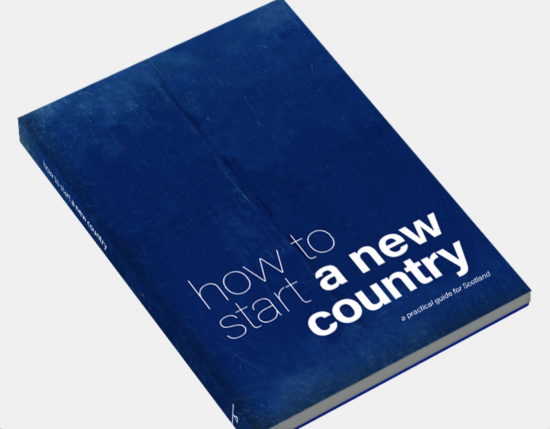 Let me get the necessary statements of conflict out of the way before going further. As I suspect many readers will know I have worked with Common Weal. I wrote a White Paper on Scottish taxation for them. You might expect me to be biased about this book as a result. And I am. But that’s only important because if I had not liked what they had to say I would not have given it blog time: there would have been better things to do.

I am writing because I think this book shows an enormous breadth of imagination in taking on massive issues that were not addressed in 2014 and which now lay the foundation for future debate on Scotland at a time when Brexit risk brings that very sharply into focus.

Almost inevitably I could not read this book without thinking about Brexit. As the book patiently addresses what might seem like boring and quite technical issues like the transition to being an independent country, the funding required to manage that process and the whole structure of the parallel organisations necessary to ensure Scotland would hit the ground running as a fully operational state you simply cannot help but think how extraordinarily beneficial it might have been if someone, somewhere who had proposed Brexit might have even had a couple of ounces of the sense the Common Weal team reveal in seeking to address all these issues in advance, which they have, and for which I applaud them.

And this thinking on their part is not broad brush. It’s detailed. Take for example the discussion on Scottish defence, which is an issue to which I had given remarkably little thought. Someone clearly has, and what is described is, for example, a Scottish navy with a clear sense of purpose. That’s considerably more useful than a Royal Navy with two aircraft carriers serving no known useful function.

Take too the economy. Here the detail is impressive. And for those with the time I suggest the longer of the two versions, simply because the detail addresses issues necessarily skimmed over in the shorter version.

Having addressed the transition in an appropriately robust fashion that I think soundly legally grounded the book makes four things clear. They are that Scotland  must have its own currency. It must have a strong macroeconomic framework. This must work for everyone. And at the heart of making it do so there must be a robust tax system based on a proper understanding of the role of tax in a modern economy. I confess that the last issue, as addressed in the longer version of the book, appears to have been influenced by my thinking. This is a new state to be built on the understanding that MMT coupled with modern tax practice can deliver
.
There will, of course, be issues overlooked in the book: in less than 200 pages that is inevitable.

And you can be sure that, like all plans written throughout the history of time, things would not quite pan out like this.

Neither of these facts are a flaw though. What this book does, quite magnificently in my opinion, is three things.

First it says there are people in Scotland who are willing to do the hard thinking for little reward. Nations are built on the back of such people.

Second it says that they don’t just have vision (although there is ample evidence of that): they also have the essential eye for detail the absence of which has blighted Brexit.

And third, the book answers difficult questions without flinching from the fact that they are hard. This is a book that says those who want an independent Scotland are realists.

I applaud all involved. Even if you have no interest in the issue of Scottish independence, this book, by looking at essential issues through a new lens, will make you ask questions in a refreshing way. It would be worth it just for that.

And as a footnote, I checked in the discussion of citizenship as to whether there was any way I might qualify. I don’t.  That was my one frustration.