Trump’s economic edifice will totter soon, at cost to us all

One chart (above all others) depresses me this morning. It is this, in the FT, and what it shows is the actual and planned US fiscal deficit: 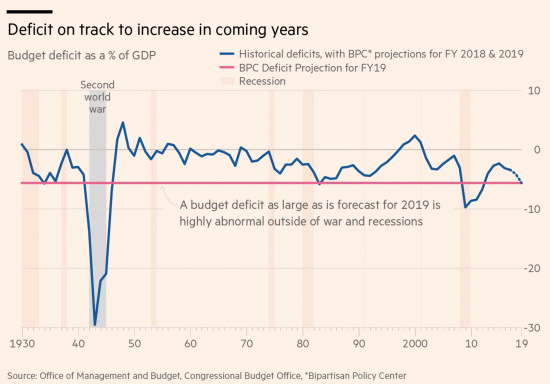 That chart is deeply worrying. The US is at near full employment now. Inflation is already rising. Interest rates are following, slowly. This is not the moment then when anyone would suggest that the US is in need of a major financial stimulus. But that is what it is going to get. The Trump tax cuts and planned massive increases in Federal spending on defence and (because the Democrats will demand a quid-pro-quo) non-defence items will means that, as the FT notes there will be an exceptional budget deficit in 2019 in the USA.

This will almost invariably have knock on effects.

First there will be inflation.

Second, that will spread: commodity price rises will deliver that.

Third, interest rates will rise as a result.

Fourth, those too will spread.

Sixth, although it's not rational to suggest that share prices will fall as a result, I think they will because they cannot deliver yield at current prices if there are interest rate rises and inflation.

Seventh, a weak housing market will be fed with those unable to pay debts seeking to sell before things get really bad.

Eighth, things will get really bad.

Ninth, the US always leads the world into these things.

So, tenth, things will get bad here.

That chart is very, very scary. And it's almost unavoidably going to happen.