The EU is right to be worried about tax haven UK

The EU is threatening sanctions to stop Britain undercutting the continent’s economy after Brexit, including “tax blacklists” and penalties against state-subsidised companies, according to a leaked strategy paper.

The measures, outlined in a presentation to EU27 member states last week, show the bloc wants unprecedented safeguards after the UK leaves to preserve a “level playing field” and counter the “clear risks” of Britain slashing taxes or relaxing regulation.

The question is, do they have reason to be concerned? The new Financial Secrecy Index report on the UK suggests that they do.

Firstly, that report and the EU both view the UK’s Crown Dependencies and Overseas Territories as being part of the UK for the purposes of assessing tax abuse risk. That is appropriate. Tax risk of the sort worried about always involves the shifting of profit between states. In other words, it’s an issue relating to foreign affairs. And the UK is responsible for the foreign affairs of its territories.

Second, these places are more than willing to trade on their UK links and the fact that their legal systems are ultimately bedded in that of the UK, which represents much of their appeal.

Third, the UK can enforce law in these jurisdictions and chooses not to do so.

Instead, fourth, it defends their right to have the secrecy laws that permit abuse.

And they do provide that secrecy. This is the TJN summary of its findings for all the jurisdictions in question: 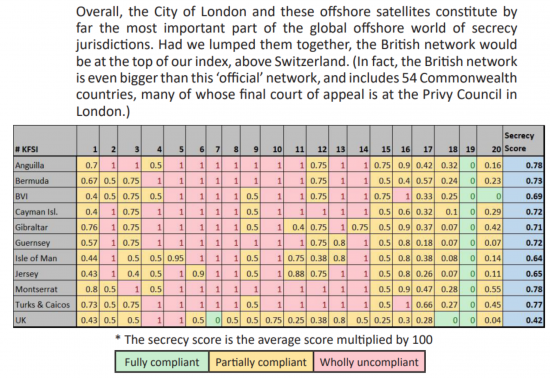 And this, to illuminate what that means, is the finding for the UK itself: 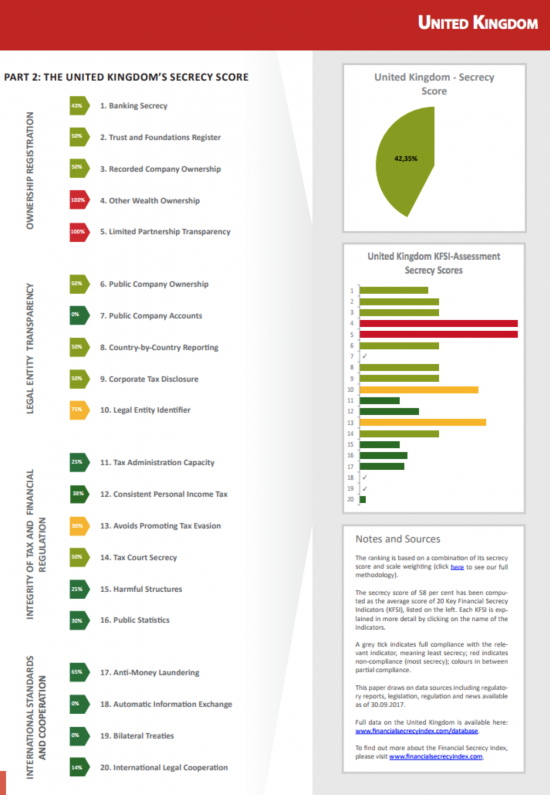 The UK is a very long way from being a place that can be relied upon by anyone when it comes to tackling tax abuse. The EU is absolutely right to be concerned. And so should we be, come to that. This abuse happens at cost to the people of the UK as a whole.