1% down and counting: UK growth since Brexit

The FT has suggested  this morning that the real cost of Brexit may be £340 million a week. I will be more honest: it is too hard to tell as yet. But, if it is measured by change in fortunes on growth this graph is telling: 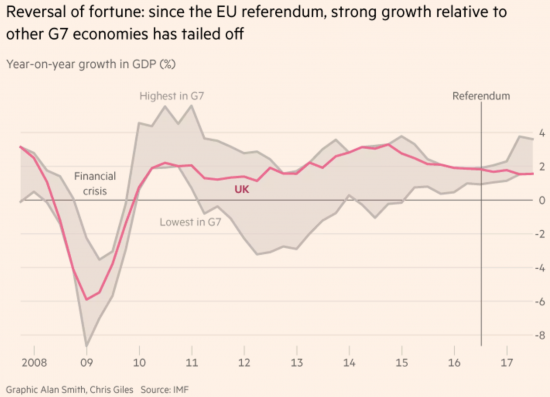 It is, admittedly, true that the UK did well from 2011 to 2016 precisely because it did so badly between 2008 and 2010,  but the point that Chris Giles is making in the FT is that the change since the referendum has been quite marked.  From being at the top of the G7 growth league it is now at the bottom,  which is pretty much where everyone now forecasts it to stay.  On this basis it is hard to disagree with the suggestion from Jonathan Portes that the UK has already lost at least 1% of its national income growth per annum as a consequence of Brexit.

I admit I was amongst those who expected this outcome.  That does not mean that I derive much pleasure from it.  And, stress, the worst is yet to come:  Brexit has not happened yet.