Brexit is for life: prepare for the long game

I was musing last night on writing a blog on the divisions that Brexit is creating within UK society, only to find Sebastian Payne had touched on the same issue in the FT overnight. He included this chart which I share because of its importance: 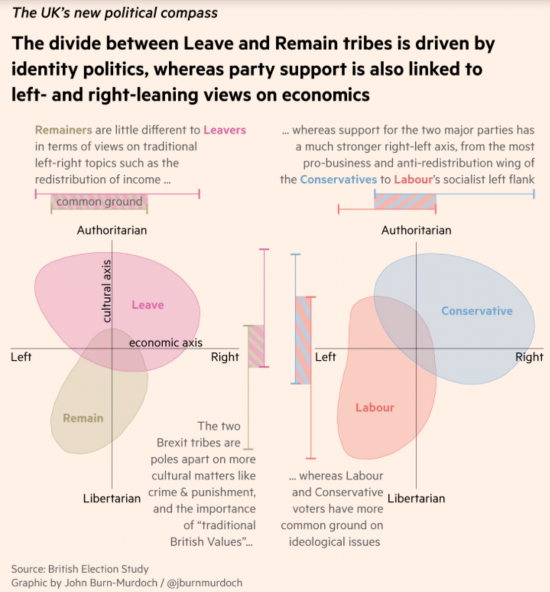 This data shows just how divisive the Brexit issue is: the common ground between left and right is much greater than between Remainers and Leavers.

Ipsos Mori data to which he also refers confirms this: 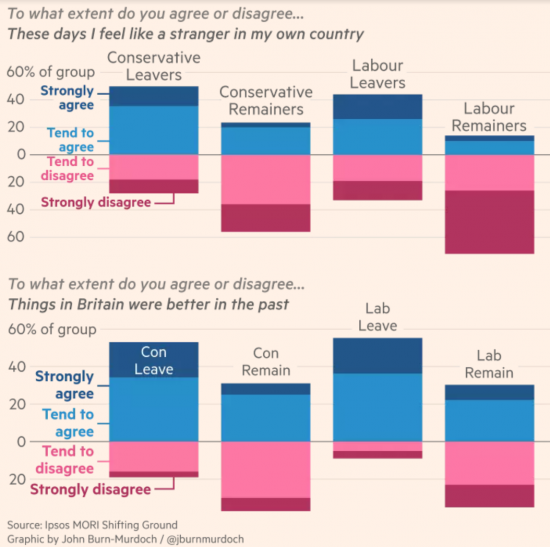 Leavers have a wholly different view of the UK from Remainers, and hold it more strongly.

Some might say, so what? Brexit is just a passing phenomenon in their view and once it has happened these divisions will disappear. I do not think so. As Payne notes, and as I have done, there is remarkably little remorse amongst Leave voters despite the problems that have arisen since June 2016 and whilst there has been an undoubted shift to Remain in opinion polls, suggesting that it would win now, the margin remains small. A deep, and really quite fundamental division within society has been opened by Brexit that I cannot see going away.

I remain hopeful that, whatever happens over the next couple of years, peace will be maintained within the UK, although I would add that I am only hopeful: I am far from confident on this issue so deep are the divisions and so great, therefore, the chance of violence if aspirations, however unrealistic, are not fulfilled. Precisely because those divisions are so deep I think they have the characteristics of a nation that might, or has, suffered civil war. These wars happen when common ground is lost. Violence is resorted to when understanding has gone. I hope that is not true in the UK, but I fear it.

I have referred more than once on this blog to the Irish civil war that happened almost a century ago, which I have studied. I could even refer back to the English civil war, which I have again studied. In both common ground was lost, and the ramifications took many decades to resolve, if they ever have been, at least in the case of Ireland where the shadow of that division still falls on politics now.

I think that this will be the case for Brexit, even with wholly peaceful outcomes. The polarity of the UK has increased. I very strongly suspect that this will be apparent in many families this Christmas. I cannot, as yet, see a way that these tensions may be resolved. And what is very obvious is that current political alignments cannot address them, which partly explains but does not exonerate (in my Remain view) Labour's current dithering on this issue.

My point is that to think about Brexit as a short term issue to resolve is important, but it is far from the only perspective that is required on it. A long term view is also necessary, and what it suggests is that unless there is fairly rapid adaptation within the UK political sphere to the new reality that we face - which might actually result in new polarisations around Brexit and how to manage it after we have left - then we will be left with wholly inadequate mechanisms to channel the stresses that really exist in society, and this is potentially very dangerous for political stability within the country.

Our outdated two party system (with apologies to all the others) and the obvious inadequacies of first-past-the-post are more apparent than ever at present, just when politics needs new ways of reflecting what is happening in society. Unless that happens I am fearful as to whether the new polarities can be contained.

If you thought Brexit was going away anytime soon I think you are wrong in other words. At my age I think it fair to say Brexit and its consequences might be for life now. It's a sobering thought.