It's hard not to celebrate this blog from the IMF: 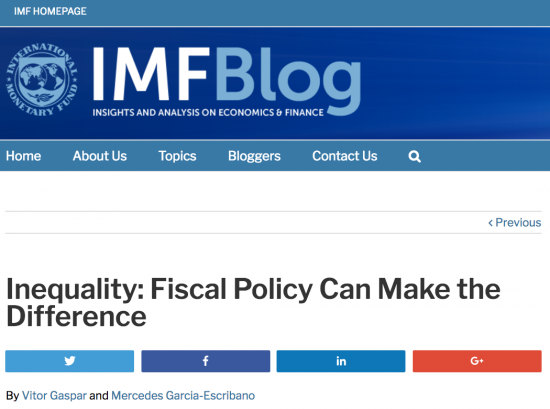 In summary, what the blog says is five things.

The first is that whilst inequality between states in the world is improving within states the story is very different. As they put it:

Inequality within countries has increased, particularly in advanced economies. Since the global economic recovery has gained pace and is now widespread, policymakers have a window of opportunity to respond with reforms that tackle inequality, and our new Fiscal Monitor shows how the right mix of fiscal policies can make the difference.

Note the implication: health and education spending as well as progressive taxation deliver reduced inequality. And these are the themes the IMF then builds on, suggesting that there are now three ways in which inequality might be tackled.

The first is by more progressive taxation:

Personal income tax progressivity has declined steeply in the 1980s and 1990s, and has remained broadly stable since then. The average top income tax rate for OECD member countries fell from 62 percent in 1981 to 35 percent in 2015. In addition, tax systems are less progressive than indicated by the statutory rates, because wealthy individuals have more access to tax relief. Importantly, we find that some advanced economies can increase progressivity without hampering growth, as long as progressivity is not excessive.

Let's not beat about the bush: this is the IMF (of all organisations) making clear that we now have insufficiently progressive taxation; that we could have more of it; that this would be beneficial in most cases; and that this will not have negative growth consequences (as is almost glaringly obvious to anyone who has thought in any way appropriately about this issue, but which is welcome, nonetheless).

A UBI–defined as a cash transfer of an equal amount to all individuals in a country–has been widely debated by economists for decades. There is now renewed interest, associated with perceptions of the effects of technology and artificial intelligence on the future of work. The Fiscal Monitor does not advocate for or against UBI, but contributes to the policy debate by presenting facts and arguments relevant for evaluating a UBI. A UBI has potential for having a significant impact on inequality and poverty as it covers all individuals at the bottom of the income distribution. But, being universal means it is costly. The Fiscal Monitor estimates that it would cost the average advanced economy 6½ percent of GDP to provide a UBI set at 25 percent of median per capita income, and the estimates vary considerably across countries. Thus, the discussion of a UBI cannot be disentangled from a discussion of its financing to make it budget neutral. Key considerations for its introduction are its consistency with other fiscal priorities–to avoid crowding out investments in infrastructure, education and health, for instance–and the method of financing, which needs to be efficient and equitable. A UBI could be an option where it substitutes for inequitable and inefficient social spending.

That is not an unambiguous endorsement - and the ambition may be too limited as well - but I welcome the fact it is on the agenda.

Finally they say this on health and education spending:

Despite progress, gaps in access to quality education and health care services between different income groups in the population remain in many countries. For example, in advanced economies, males with tertiary education live up to 14 years longer than those with secondary education or less. Better public spending can help, for instance, by reallocating education or health spending from the rich to the poor while keeping total public education or health spending unchanged. The Fiscal Monitor finds that closing the inequality gap in basic health coverage could raise life expectancy, on average, by 1.3 years in emerging and developing countries.

With the massive health disparities that are to be found in the UK I do not think this advantage will be limited to developing countries.

The Fiscal Monitor which explores these issues in more depth is available here. The good news is that the case for tackling inequality is growing.