The last decade has been a death throe for neoliberal capitalism

The FT has been running a series of articles on the charts that its writers think best show the impact of ten years of financial crisis. Today Martin Wolf offered this: 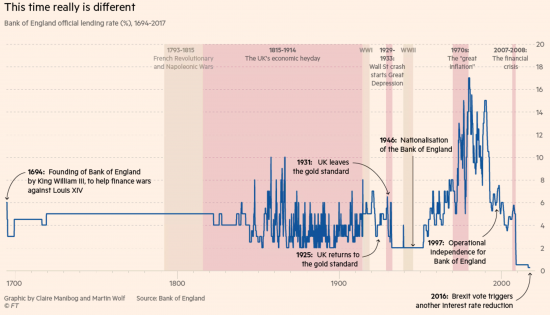 His point is that the low rates are unprecedented and despite them it is deflation and not inflation that has been the greatest fear, and with good reason. He is unable to explain what this might suggest happens next. And in fairness, we don't know precisely. But nothing about it looks encouraging.

What he, and what most, won't say is that it means that this current model of capitalism is dead. It is no longer entrepreneurial. It no longer innovates. It no longer provides work. It does not aspire to do so. It only seeks to make money out of money. And that's why society can no longer afford it. The decade has been a death throe for neoliberal capitalism. What that record low represents is the dying note for markets that no longer work. But the new has yet to be born.