The national debt costs us, in net terms, precisely nothing a year but that’s apparently too costly for the next generation to bear

I have been asked to comment on the paranoia some on the political right are displaying at present about the cost of interest on the national debt which is, supposedly, a burden on generations to come.

First of all let me offer some data: 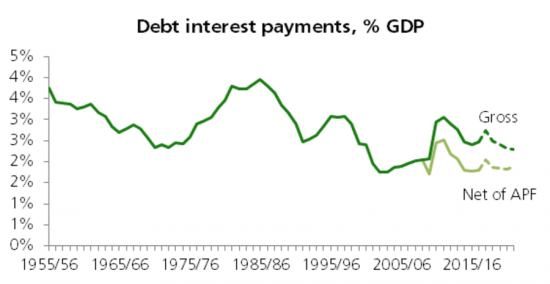 The chart comes from the House of Commons Library in June 2017: this is up to date. And what it shows is that the gross cost of UK national debt in terms of interest is about £49 billion nominally, but in reality it is at least £13 billion lower at £36 billion because of quantitative easing. The government cannot, of course, owe itself interest on its own debt that it owns itself, and so that part is not paid. If you want the clearest possible indication that QE debt only notionally exists then this is it.

So what is the reason for the obsession with the remaining £36bn or so cost? It can't be because it is excessive in proportion to the sums owing in our recent past, because it clearly is not. What is also very obvious is that the cost of our national debt is running at exceptionally low levels. We paid a lot more interest as a proportion of GDP in past decades when the debt to GDP ratio was much lower. If you want evidence that the paranoia about the national debt is misplaced right now then this is that.

And then I have to dutifully remind you who receives this relatively modest income. Pensioners are by far the most significant recipients. Government debt underpins most UK private pension annuities because the whole thing about an annuity is that you want it to be secure, stable, reliable, boring, but to at least be income paying to some extent for the rest of your life, which you can no better estimate as to duration than can your friendly neighbourhood actuary. In our national economy this is by far the most important role gilts have to play.

Now of course we can hate paying private pensioners a return on their savings. And you can, of course, hate their desire for a safe, stable, boring place to locate their money. It is, very obviously, utterly unreasonable of them to want to lend to the government in this way with no likely net return being earned, having allowed for inflation, at present. I mean, why wouldn't the Tories hate the Tory voting pensioners who are the biggest recipients of payments on the national debt which doesn't actually burden the next generation but is mainly designed to benefit the last? Perhaps it's because they think it was pensioners, like nurses, teachers and firefighters who crashed the economy in 2008 and we should now seek to wreak revenge upon them by denying them the chance they want to save in a way that technically costs us nothing.

And how do I know it costs us nothing? Because of inflation. That is running at about 2.9 per cent right now. Given that net national debt after QE is about £1.3 trillion this means inflation is writing off the national debt at a rate of £37.7 billion or so a year right now - which is slightly higher than the annual cost of interest paid, meaning the net cost to the nation of national debt each year right now is near enough precisely nothing.

But of course this net return of nothing is not only paid to pensioners. Some goes to banks which need gilts as part of their portfolio of ultra safe asset holdings. And some goes to insurance companies who need assets that behave remarkably like cash but don't carry the risk cash does of default if a bank goes down. And some just belongs to individuals. But it makes no difference, because they are all making nothing, and what is more, some of them might even be paying some tax on the privilege of doing so.

But the Tories are apparently still deeply resentful of this non-cost which is apparently, despite being in net terms nothing at all, a massive burden on future generations who try as they might will, in the Tory imagination, never be able to save up enough to pay that net nil rate of return.

As an example of economic madness the complaints currently being made about the cost of national debt by the Tories come as close to total economic illiteracy as it is possible to get. But they remain, despite that, the supposed party of economic competence in the public imagination. To say I despair grossly misstates my sentiment on that issue. And in the meantime the country is denied the benefit of the free money that could be used to invest in the future our children need because a net cost of zero per cent is apparently too high for them to bear.