I have been looking at data on employment and taxation in the UK. Because HMRC publish tax data very late I have been forced to look at the tax year 2014/15 and have used employment data published by the Office for National Statistics for March 2015 for comparison.

The following is data from these sources for March 2015 split by age bands on economically active and inactive people (the number for 0-15 is current, but does not impact the analysis that follows). The bands are those used for official statistics and reflect a past era of employment and pensions, but are all that is available:

The following tax data is from HMRC for 2014/15 when combined with ONS labour force data for March 2015: 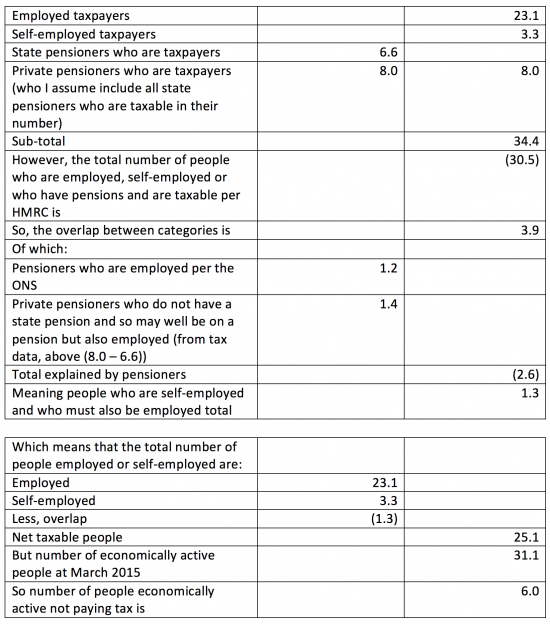 This immediately gives rise to some quite surprising conclusions, even allowing for the obvious margins for error that must exist in any such data and its extrapolation.

That can be analysed in a little more depth. The ONS said there are 4.5 million self-employed people in March 2015: the data therefore suggests 1.2 million of them did not pay tax. This means that 26.7% of the self-employed did not pay tax in 2014/15 whilst 17.2% of employees did not.

Some, of course some will say this is a good thing. I beg to differ. As the statistics make clear, in a great many ways these people don’t count. They disappear from view. Working these numbers out takes some effort.

More importantly, saying this is good news ignores the simple fact that this means that many of the people in question are almost certainly living in conditions of considerable hardship.

And this is what is really significant about this data: near enough one in six UK employees and more than one in four of the UK’s self-employed people do not pay tax because they don’t earn a figure that is itself only, near enough, just 75% of the UK minimum wage.

If you want to know what is wrong with the UK economy this is the answer. We have a government that is apparently happy with large numbers of people living on far too little.

This country needs a pay rise.